NBA star James Harden has been doing whatever the internet asks him to - if he misses a shot - in BBDO New York’s latest interactive work for Foot Locker. 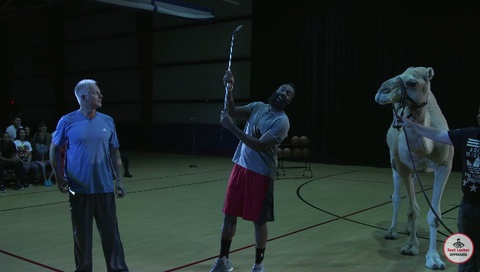 New York-based specialty athletic retailer Foot Locker teamed up with NBA shooting guard James Harden for “Play My Tweet”. Twitter users were encouraged to Tweet personal requests - for the chance to have Harden fulfil them - to @Footlocker with the hashtag #PlayMyTweet.

In the promo, Harden offers himself up for allsorts: yodelling, eating a raw onion, waxing his legs, braiding his beard, freestyle rapping and even explaining the Theory of Relativity.

Whether it was sending a fan an autographed jersey or singing Happy Birthday to your mother, legitimate requests were considered (as long as fans kept it clean!). The brand chose the most creative and fun tweets and printed them on basketballs.

Then fans watched it all go down last week, when “Play My Tweet” took place in Houston with Harden taking shots using the basketballs printed with selected fans' Tweets.

If he made the shot, he was safe – but if he missed it, he had to fulfil the request. Each shot's difficulty level corresponded to the size of the request (such as taking a shot blindfolded), and fans could watch the challenge go down via Foot Locker's YouTube channel and Twitter page.

"Foot Locker has had a great deal of fun teaming up with James Harden for past engaging games with fans. We're excited to take that engagement to the next level with the Play My Tweet challenge," said Stacy Cunningham, Executive Vice President of Marketing for Foot Locker.

The event saw Harden doing the ‘Stanky Leg’ dance move, recording someone’s voicemail, holding a party for veterans, singint ‘I’m a little teapot’ with a children’s tea set, and even taking a selfie with a camel. Yes, they had a camel on the premises (so there’s a decent chance he might have had to take a slightly slack shot in order to make use of the camel being on site). 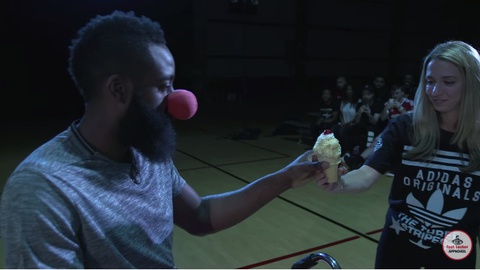