How Irn-Bru achieved 1.6m views by giving the link exclusively to a single fan of the brand. 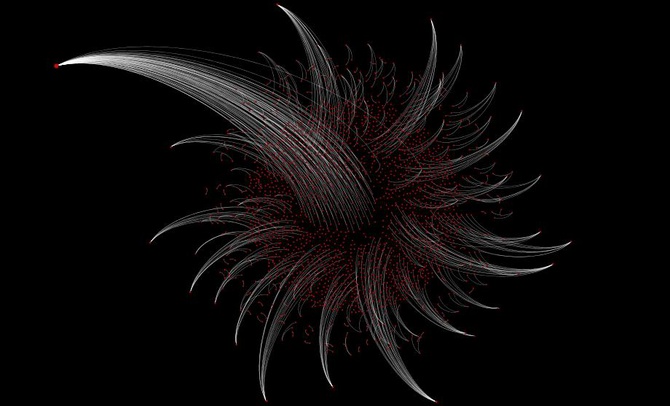 This is what an Irn-Bru film being shared across Twitter looks like under the data visualisation equivalent of an electron microscope. It is actually a data snapshot four weeks after a YouTube link to a new Irn-Bru ad was first tweeted by a single account with just over 300 followers.

Each red dot, or node, represents a Twitter account that mentioned the brand’s YouTube link. And the white lines, or edges, represent the number of reactions (mainly retweets) generated by each mention.

They gave the YouTube link exclusively to a single fan of the brand (chosen via a Twitter lottery) and let her release the film into the wild, using the Topsy API to watch what happened next. The film, created by Edinburgh agency Leith and based on a concept developed by digital agency Blonde, racked up over a million views in less than a month thanks to some high influence Twitter accounts, many small and connected groups as well as many isolated mentions.

Three weeks after the initial tweet, the ad was aired in a few high profile television spots during the European Football Championship, which generated an additional 300,000 YouTube views in 48 hours. It also triggered hundreds of additional, isolated mentions of the link on Twitter.

"It’s hard to predict the word-of-mouth performance of branded content in advance, but we knew from the moment that we saw the script that this was going to be special," says strategic research agency, Face.

"“Irn-Bru and “Fanny” is as close to a sure social media thing as it gets."

“That belief and confidence led us to be more adventurous with our digital seeding and amplification strategy than usual. Our belief in the awesomeness of the content gave us strategic options.

“Rather than going in with all social media and PR guns blazing, we decided to give the new ad to a single, randomly selected fan and see what happened.”

Irn-Bru is a soft drink produced in Scotland and is often described as “Scotland’s other national drink” (after Scotch whisky). The brand has been noted for out there campaigns in the past, several of which have been featured in Lürzer’s Archive magazine.