After reading an article about a lone doctor working in a solar-powered hospital in the Sudanese Nuba Mountains and a boy named Daniel who lost both his arms during a bombing raid, Not Impossible founder Mike Ebeling turned to technology to help.

Just before Thanksgiving 2013, Not Impossible's Mick Ebeling returned home from Sudan's Nuba Mountains where he set up what is probably the world's first 3D-printing prosthetic lab and training facility. More to the point of the journey is that Mick managed to give hope and independence back to a kid who, at age 14, had both his arms blown off and considered his life not worth living.

Created by Venables Bell & Partners and Directed by Oscar-nominated documentarian Lucy Walker, this short film is the third instalment of the short-film series under Intel’s Look Inside platform.

Just prior to the trip, the now 16-year-old Daniel was located in a 70,000 person refugee camp in Yida, and, in November 2013, he received the first version of his left arm. The Daniel Hand enabled him to feed himself for the first time in two years. 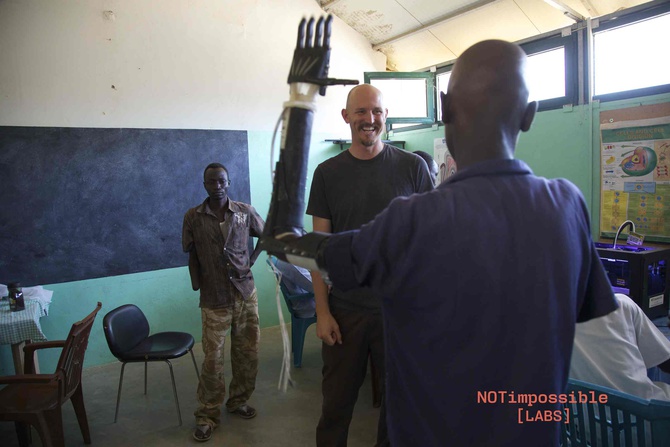 After Daniel had his own “hand,” with the help of Dr. Tom Catena, an American doctor working under extreme conditions, the team set about teaching others to print and assemble 3D prostheses. By the time the team returned to their homes in the U.S., the local trainees had successfully printed and fitted another two arms, proving the project will have lasting benefit beyond the team’s presence.

That Project Daniel successfully unfolded in a region where a cease-fire had expired (and where fighting has now escalated), and that the people taught to utilize the 3D printers were barely familiar with computers, let alone the idea of 3D printers, is a milestone achievement that bears the potential for global impact.

“We’re hopeful that other children and adults in other regions of Africa, as well as other continents around the globe, will utilize the power of this new technology for similar beginnings,” said Not Impossible founder Mick Ebeling. 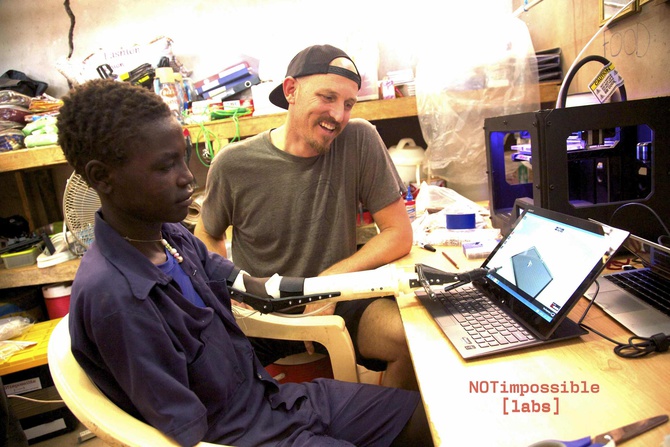 “We believe Daniel’s story will ignite a global campaign. The sharing of the prostheses’ specifications, which Not Impossible will provide free and open-source, will enable any person in need, anywhere on the planet, to use technology for its best purpose: restoring humanity.”

The Daniel Hand came to fruition at Not Impossible HQ in Venice, California by crowdsourcing a dream team of innovators (including the South African inventor of the Robohand, an Australian MIT neuroscientist and a 3D printing company owner from Northern California) to crowd-solve the 3Dprintable prostheses. The project was supported by NY-based precision engineering company Precipart and by Intel, a global leader in innovative essential technologies.

The online film is part of the campaign to raise awareness of Daniel's story and to inspire others to achieve the (not) impossible. As part of this quest, VB&P and Intel have created digital and social extensions, allowing people to get to know Ebeling, as well as challenge them to ask, “Who is my Daniel?”

It will roll out on other platforms such as a series of teaser videos on Vine and Instagram that will feature the 3D printing process as well as the assembly of a prosthetic arm.