Need Gerrard Butler's Spartans to give you a boost on a rainy day? Netflix gets on the GIFs in a digital outdoor campaign by Ogilvy Paris that has been tailored to react to the viewer's surroundings.

To launch the on demand streaming service in France, Ogilvy Paris has created the first digital outdoor campaign made entirely with reaction GIFs.

The digital outdoor campaign in France has been designed to react relevantly in context to its viewer's physical or emotional situation. For instance, there's a reactive GIF situated at the entrance to a Parisian subway station that people would see as they seek cover just after being caught in the rain after a long day.

The GIF is a bigger than life Spartan-dressed Gerard Butler and his "300" soldiers battling against the Persians army of more than one million during the stormy Battle of Thermopylae. The tagline of which reads: "Stuck in the rain at the bus stop? Cosy up to a nice movie on Netflix”.

“We thought that it would be perfect to connect Netflix content to people's emotions, interests and behaviours in this way and put its message in the consumer’s life. Being relevant was key and people love to see their favourite content.”

To keep the GIF billboards in a seemingly reactive mode to its environment, Ogilvy and Screenbase communicate in realtime with one another to prepare the GIFs to be in context – for instance, the day’s weather, events or news headlines.

“The biggest challenge was finding and picking the best scenes from Netflix content that would make for relevant and funny GIFs when put in a particular context,” says Creative Director, Nicolas Lautier.

During November and December, a hundred different GIFs are expected to appear on more than 2,000 digital out-of-home screens in France National Railways, Parisian subways, malls, cinemas and buildings. 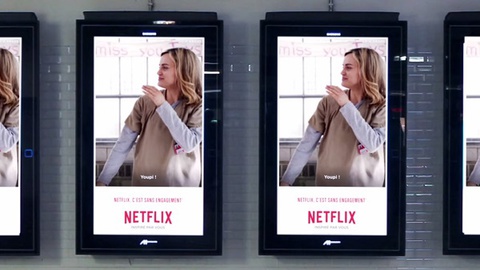