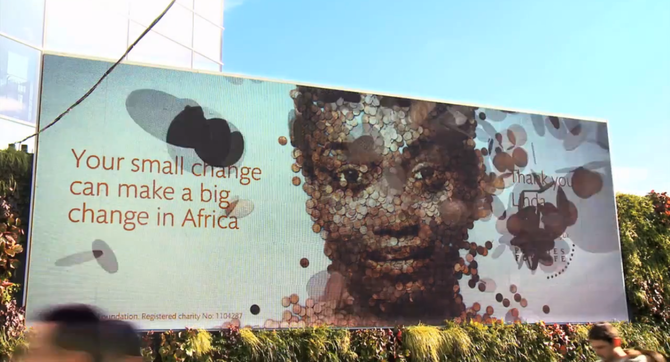 So they used text messages to enable people to make an instant donation to the charity and receive an immediate, public reward for their support.

On the digital poster site, they created unfinished portraits of African women, made entirely of pennies. Then they invited passers-by to complete each picture by texting a donation to the poster, along with their name.

The user’s SMS activated on-screen animation and their donation dropped into place as an animated shower of coins, adding to the unfinished portrait.

The donor's name also appeared on the screen, with a personal 'thank you' from the charity. As soon as they had received enough donations to fund one business loan, all the donors were rewarded with an animation sequence that completed the portrait.

314,000 people were exposed to the campaign at the site itself and through Twitter. More importantly, from one poster site, in its first weekend, 21 women in Africa who had nothing now have their own small businesses.

The campaign recently took the Mobile Communications Gold at the 2012 Epica Awards.

“The world, as we all know, is digital and mobile,” says Epica.

“So it’s possible for a digital mobile campaign to win an Epica Grand Prix in the Outdoor category. The core idea – donating loose change to support a charity – is as old as they get. The difference here is that these were virtual pennies donated via smartphone.

“Many great posters were entered this year. Some of them, arguably, had more artistic merit than this outdoor site. But the jury agreed unanimously that the “Pennies For Life” operation was an idea that represented the future of outdoor communications. That made it a winner – no coin toss required.”