Social network Pinterest is creating quite the buzz with a reported 200,000 unique monthly users in the UK and already 12 million in the US. What part does the noisy new kid on the block have to play in advertising and branding? 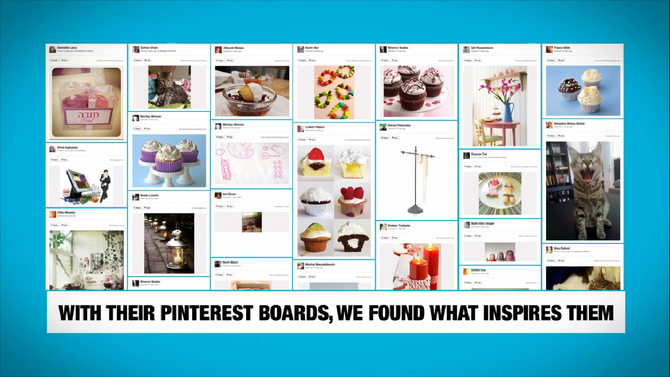 The Pinterest site allows you to ‘pin’ any image from the web onto a virtual pinboard – curating online moodboards around absolutely any theme or interest - a bit like an online scrapbook. Early adopters set a trend of home decor, wedding, food and craft inspiration categories, and interesting statistics say that 97 per cent of Pinterest’s Facebook fans are women.

However, Pinterest’s ever-growing popularity suggests that the number of men using the site with eventually increase. We are also likely to see a gradual increase in brands utilising the site to curate their products or simply tap into the interests of their audiences.

In March, the feminine product brand, Kotex, launched one of the first Pinterest campaigns, called “Woman’s Inspiration Day by Kotex”, created by Israeli agency, Smoyz. They targeted 50 ‘influential’ Pinterest users and studied their Pinterest boards before and then made handcrafted gifts for those users based on the items they liked most. All they needed to do was ‘repin’ the gift design in order to receive a box containing them.

“We looked for a unique platform where women express themselves freely and openly emphasising style and design. Pinterest is the ultimate social platform for self expression.”

In total, 50 gift boxes were sent out and Smoyz reports that almost all of the recipients posted about their gifts on social networking platforms such as Facebook, Twitter, Instagram and of course Pinterest, leading to 2,284 interactions and 694,853 impressions on the web.

“We had a ripple effect," says Yael.

"And women who were not involved in the campaign posted statuses like ‘What is this deal with all the Kotex gifts, can I have one too?!’ The main purpose was to have woman talk about the brand and the experience and it worked.”

Peugeot in Panama is another brand that is making use of the social platform. It is currently running a campaign on to increase followers on the site. The company has pinned various puzzles depicting different car models with pieces missing. Followers can search for and find pieces, pin them onto their boards to make up a complete image and share it with Peugeot in order to win prizes.

Mashable reports that although there are plenty of brands actively ‘pinning’, such as HGTV, Kate Spade, Whole Foods and Etsy, major consumer brands are not yet on there (Coca-Cola, Oreo, H&M, which have a massive Google+ audience). Maybe it is because Pinterest’s female audience currently outweighs the male one – by a long way. Perhaps we’ll see more brands emerge over the next few months.

Smoyz's CEO, Yael, on other brands using Pinterest: "Of course they will. Though, I think the brands should use it wisely. As 'likes' on Facebook are not the goal, neither 'pins' on Pinterest are the goal. The goal is to achieve intimate moments with the brand. And pinterest is a great way of achieving this goal."