Starbucks' interactive film was filmed in 28 countries in one day

With this interactive film, chronicling a single day and spanning 28 countries, Starbucks aspired to capture all the great moments that happen when people meet face-to-face at the coffeehouse chain. 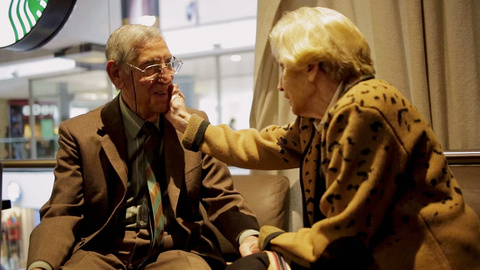 A multi-editor collaboration (Stopp/Family, Cut+Run and M ss ng p eces) helped 72andSunny create the global brand campaign and documentary series “Meet Me At Starbucks.” 220 hours of footage was filmed at 59 international Starbucks stores by 39 local filmmakers and ten local photographers. The ambitious project features various subjects - from a hearing-impaired group meeting, to a group of women discussing scrapbooking, to elderly couples to teenage friends - going about their business at Starbucks.

The campaign was edited by Stephen Berger, Lucas Eskin, Isaac Chen, Sean Stender and Kendra Juul into little vignettes that reveal the coffee giant to be a place where things happen: meetings, love encounters, celebrations, and connections of all kinds.

The interactive docu-style story piece connects audiences to eight mini documentaries. Prompts during the video will allow viewers to watch mini-documentaries about some of the subjects. When that sub-documentary is done, viewers can seamlessly return to viewing the main documentary.

For instance, one of the sub-films follows a deaf woman in Honolulu who said she felt isolated from most conversations until she learned about a group of deaf friends who held meetings at a local Starbucks. One tells the story of a group called T.P.U.G. which meets regularly at the Starbucks to play games on their old school Commodore computers, always inviting laptop and smartphone users to join in. Another features the story of enduring love between an elderly couple.

The film is part of a 360-campaign, which also includes television spots, display ads and an Instagram hashtag #HowWeMet, where Starbucks will encourage users to take photos illustrating how people met.. Each shines a light on this unique place that brings millions of people revealing the answer to: “If you went to any Starbucks in the world, on any given day, what would you find? New Love? Enduring love? Respect? Understanding?”

“Meet Me at Starbucks is a collection of films that celebrate the good things that happen when people get together,” says 72andSunny. “Filmed in 28 countries, in one day, we captured countless moments that tell the stories of real customers for Starbucks’ first global brand campaign.”

72andSunny’s work originates from Starbucks having monitored its customers on social media. The company says they noticed multiple videos on YouTube of Starbucks fans and found "there were stories that were taking place inside our stores”. The idea grew into the “Meet Me at Starbucks” project.