A new digital platform, Word Map, is an interactive linguistic experiment that aggregates content from Google Translate and Wikipedia to illustrate the spoken word around the globe. 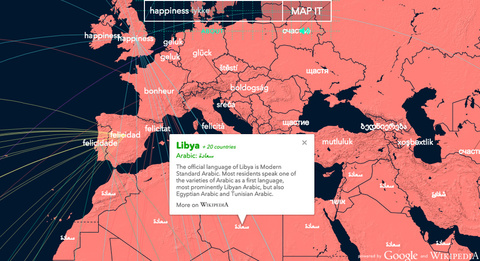 Type the word ‘cat’ or any word of your choosing, into the Word Map box and watch the translations pop up across geographical locations. The browser will map the content from English to any other language, or vice versa, so users can learn a new word and its proper pronunciation.

The zoom feature showcases smaller countries, so people can visualise the various ways to say hello in places such as Malaysia, Kazakhstan or Indonesia.

The latest in the Chrome Experiments series also works with the Wikipedia API. It allows the user to learn more about the history of the language based on geographical space pulled from collective information from the online encyclopaedia.

For instance, clicking on Canada will display information about the number of countries that speak English (approximately 20), as well as the history of the Canadian population who speak French at home.

You also learn that France, from the 17th to mid-20th century, French served as the pre-eminent international language as well as a lingua franca among the educated classes of Europe. 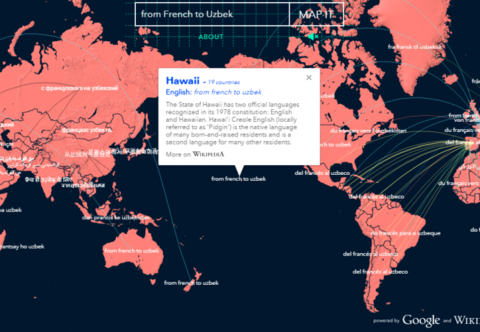 Lines connect different countries that share a common language and illustrate the influx in accents across destinations, such as the way ‘welcome’ sounds when spoken in an American accent versus an Australian accent.

The map also shows the range of scripts in the Middle East and into Asia from Urdu to Hindi in India, Nepal’s Nepali and Thai.

Sao Paulo-based Loducca created the project for Easy Way Language Center created to help visualise the relationship between geography and language. The language school offers creative translation for ad students, helping them to adapt their initiatives for audiences around the world.