AD AESTHETICS FROM THE EIGHTIES

“With the death of Margaret Thatcher earlier this week, the 1980s have been very prominent in our collective minds recently,” says Michael Weinzettl.

You can feel the influence of that grim and greedy era everywhere in popular culture at the moment, be it in music, fashion or design.

Just last year, in the New Books section of Vol. 4/2012, I reviewed the "Pretty Ugly. Visual Rebellion in Design," from Taschen, in which quite a few of the examples of showcased "new design" looked just like work by typical 80s designers such as April Greiman, or punk and new wave design in general.

It used to be that you were only granted one or two retro fads in your lifetime, in which the fashions of your early years were revisited by the zeitgeist. Nowadays it all changes within years, with some retro fads, such as 60s and 70s staying on and on and co-existing with those of another decade side by side. Now, apparently, 80s style rules supreme.

Which brings me on to the new campaign for Old Spice soap bars by  Wieden + Kennedy, Portland, which once again reminds us of – to me at least – that aesthetically and politically dreadful era.

Of course it’s only a jokey spoof of 80s ad aesthetics with all its horrors, but we all know what Freud said about jokes and also that parody and spoof are key traits through which postmodernism, in advertising or elsewhere, can be defined .

The spots are of course very well crafted and their reception in Ad Land has been very enthusiastic.

They are seen, as far as I can tell, as the  brand’s worthiest successors to  2010’s “The Man Your Man Could Smell Like” campaign (initially launched to market Old Spice's Red Zone After Hours Body Wash, but  subsequently expanded to include other products following the success of the initial ads).

One of the new ads for the new “manly” Old Spice soap bar is entitled "Shower" and features chisel-jawed surgeon that has his own shower blasting him wherever he goes. In another one, “Watermelon,” for Old Spice’s “Fiji” bar, you get another sexy hunk taking a shower then catching a basketball that is actually a watermelon that you plunge your hand into to get to the bar of soap.

Apart from the cinematography and the whole set-up, the 80s ad aesthetics that I have referred to are of course most obvious in the soundtrack with its wordy yet dramatically sung jingles.

I appreciate their humour but at the same time these new commercials make me wince, as did the "Real Men of Genius" Budweiser campaign from nine years ago of which the Old Spice ad remind me.

These really quite funny commercials, with titles such as “Mr. Footlong Hot Dog Inventor,” came from DDB Chicago and were major favourites at Cannes that year. 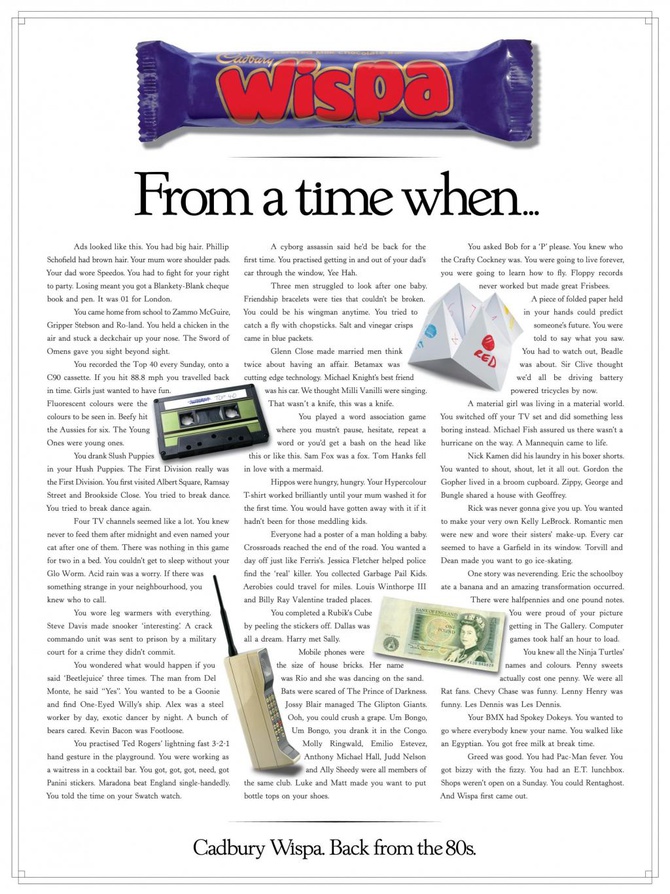 A print ad that also did a good job of evoking the 1980s was the Cadbury Wispa “Back from the 80s” (see below) by Publicis, London (found in Archive Vol. 1/2008). The chocolate bar was originally launched in 1983 but had been discontinued in 2003, then relaunched five years later with this campaign.

If you ask me, however, I wouldn’t mind being left alone with the pop-cultural horrors of that bygone era. As far as they go, I stand with the sentiment of that brilliantly bitter Elvis Costello song, Tramp The Dirt Down (from his 1989 album Spike), in which he sings that he wishes to live long enough to see Margaret Thatcher die.

It does, admittedly, make for a somewhat uncomfortable listening experience in these few days after the former Iron Lady’s death, but I feel the same about these 80s aesthetics cropping up everywhere.