Japan made a seismic comeback at Adfest 2012. Our Editor-in-Chief, Michael Weinzettl, on the winners and our complicated relationship with the Japanese ad industry. 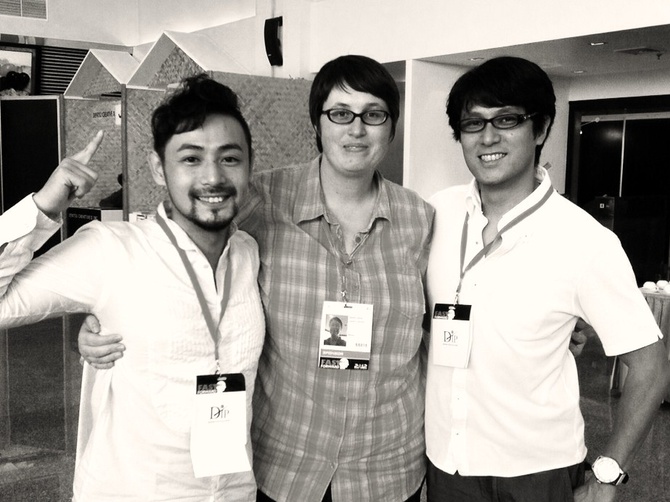 Sandra Lehnst, CEO of our company, had her 37th birthday this week and it must have been her longest birthday ever. It started on 19th March at 6pm (MET) in Thailand and ended at midnight (MET) of the 20th when she was on the plane back to Vienna.

On behalf of Lürzer’s Archive she had been in Pattaya to attend the 15th Asia Pacific Advertising Festival (AdFest). During her time there, she had the chance to meet with lots of advertising notables such as the Grand Jury President, Bob Greenberg. From what I heard, he initially seemed to mistake Lürzer’s Archive for Creative Review, claiming that we no longer featured so much advertising and were more design-oriented now. I’m sure Sandra was able to set him right on that point.

Amongst the many other ad people she met were Akira Kagami, Executive Advisor & Global Executive Creative Advisor of Dentsu, Japan (you can’t get any higher than that on Dentsu’s corporate ladder!), Sachin Ambekar, Chief Creative Officer of Leo Burnett, Sri Lanka and Shinichi Hori, Corporate Officer of Hakuhodo, Japan, together with Kentaro Kimura, Hakuhodo’s Co-CEO and Executive Creative Director. As a former exchange student in Japan, Sandra was able to surprise the latter two by conversing with them in Japanese. Many creatives, including Surachai Puthikulangkura, came by our special booth to say hello, telling Sandra how much they love the magazine - and oddly - its smell. Alas, we can’t provide this olfactory treat online (at least not yet).

After having been absent from AdFest in 2011 on account of the T?hoku earthquake and tsunami, Japan was back with a vengeance this year winning tons of awards: eight out of nine Gold Lotus Awards in the Cyber category alone went to Japanese agencies  as well as top honours in the film category.  Not surprisingly, Dentsu was also named Agency of the Year.

Our relations with the Japanese ad scene have not always been easy ones. Although we boasted up to 1,000 subscribers, after a brief period in the late 80s when we received loads of submissions for the magazine, the industry suddenly seemed to clam up. It became almost impossible to get Japanese work for Archive on a regular basis. There were “piracy issues” we were told. I believe this meant that they were afraid Western creatives and readers of Archive would steal their ideas if featured in the magazine (as if…!). And the fact that almost no one in advertising there spoke English  - and we didn’t have Sandra yet to lend us her skills as an interpreter - didn’t exactly help either.

Another reason of course is the huge size of Dentsu and Hakuhodo who each have up to 4,000 clients and more than a thousand creative directors working on these accounts. We might get individual CDs from these agencies to submit their own work but there was never anyone who could send us a selection of the whole agency’s output for possible inclusion in our magazine.

Fortunately these days seem to be over now, especially since we now have Andrew Thomas of Creative Hybrid in Tokyo, who gets in touch with Japanese agencies and makes sure we stay up to date on interesting Japanese ads.

But let’s finally have a look at the print and film work that won.  If you’re a subscriber to our magazine or followed Cannes last year, you can rest assured that you really didn’t miss all that much. (Of course I realise that festivals like AdFest may be important to attend for a hundred other reasons).

First of all there was the Cannes 2011 Print Grand Prix, the Samsonite “Heaven or Hell” billboard/print ad by JWT, Shanghai, which won AdFest’s Best in Show in Print (Surachai Puthikulangkura, who I mentioned, was one of its co-creators and art directors and features in this week’s Who’s Who section). Other winners included the Pictionary campaign, the only Gold in the Print Category, and the Australian Defence Force campaign.

Pretty much the same is true for the film category:  Three of the seven Gold Lotus winners were already published in Archive as long as a year ago, including: Touchwood “Xylophone”, also a Gold Lion winner at Cannes (we interviewed Masashi Kawamura, one of the associates of the spot's director, Sei Hishikawa,  in our latest print issue), the very funny “60 Things in 60 Seconds” for TV channel MySky by DDB Auckland and Scope “See the Person” by Leo Burnett, Melbourne.

Of the ones that I had not yet seen, is a spot for retailer Sunshine Sakae, which is very funny in a slapstick kind of way (who can forget the sight of the giant naked foot stuck in the taxi window and banging against trees?) but not a whole lot more really than an extended, albeit well-executed, joke with the brand’s logo tacked on at the end. One could run the same commercial for all sorts of products that claim to put their consumers in a good mood if one exchanged the ending.

As for the Best in Show winner, a series of commercials for the Zeniya Honten Corporation by T&E, Fukuoka, there’s a big mystery surrounding them at the moment - you can’t find them anywhere on the net, except in Japanese with no subtitles – and only if you enter the spots’ titles on Google in Japanese characters. Damn! I hope this doesn’t mean there’s some kind of Japanese “piracy paranoia” rearing its ugly head again.