The weeks leading up to Cannes are always rife with speculation as to who will be among the frontrunners for the various Grand Prix there. Michael Weinzettl talks contenders, juries and Lions. 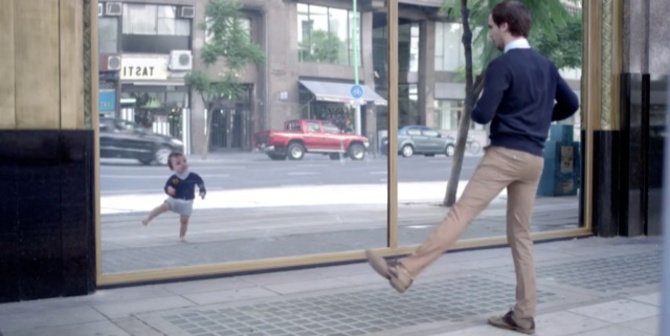 They now have quite a lot of main categories and I too tend to lose track of knowing what is what, but Archive being what it is, our main focus is on the awards given to print, outdoor, digital and film.

One of the best Cannes predictions I know is published each year by The Gunn Report. They call it their Cannes Lions Sweepstakes, for which they have selected 20 films which they think have a good chance of picking up a Lion. It’s a competition open to all, so if you feel like it, visit the page where you will find the 20 films along with a voting sheet.

As usual, most of the films – four fifths to be exact – have already been featured in Archive over the last 12 months. The remaining fifth is scheduled to be featured in Vol. 4/2013 (though with a couple of them I’m not so sure I really want to.)

Among the top contenders according to The Gunn Report includes the perennial crowd-pleaser “Baby and Me” for Evian from BETC, Paris (which you will find in Lürzer’s Archive Vol. 3/2013).

Contenders that are bound to win something just because of the many awards picked up already, include the Metro Trains “Dumb Ways to Die” film (Vol. 1/2013), the Channel 4 “Meet the Superhumans” spot for the their Paralympics coverage (Vol. 5/2012) or even the social spot for Refuge, in which YouTube sensation Lauren Luke appears for a very different kind of make-up tutorial than expected (Vol. 4/2012).

There are spots for brands that have, over the years, built up a strong reputation for quirky and popular advertising such as the Axe series (Vol. 5/2012) – on the list for their “Susan Glenn” spot – as well as ads of Super Bowl fame and beautiful epic productions such as the John Lewis Christmas ad “The Journey” (Vol. 1/2013) Leica's “Soul” (Vol. 2/2013).

There is no doubt that any of the ads on the list will be awarded with some kind of metal. The question is, however, whether the jurors will want to give a top award to a commercial, that’s been around for a while and has received awards before.

Juries, as I know from my experience in the ones I have sat on, do like to come off as not falling for the overly obvious ones (unless a commercial is total standout such as Honda’s “Grrrr” spot from a few years back or, of course, Cadbury’s “Gorilla”.)

Frequently, they're reluctant to give the Grand Prix to something that’s already had its share of applause from the ad industry worldwide. An element of surprise when announcing a winner is something very important indeed for the identity of a festival. So, in a way, accolades already bestowed on a piece of work may even trigger a backlash with jurors when it comes to giving out top prizes.

In all this, I’m, of course, shutting my eyes to the lobbying going on behind the scenes by certain networks or delegations - although that too can be a decisive factor.

A point in case was 1995, when Frank Lowe as the Cannes jury chairman caused uproar by declining to award a Grand Prix at all, claiming none of the work was good enough - not only in Film, but also in Press and Outdoor. Since then, juries have been obliged to choose an overall winner.

Apparently he was hell-bent on manipulating the jurors so they would not award the Grand Prix that year to competitor BBH London’s “Drugstore” commercial for Levi’s. In another transparent move, Heineken, a longtime client of Lowe’s in the UK (if not for much longer after that) was named Advertiser of the Year 1995.

But of course contingencies such as these make speculation on the eventual Grand Prix winners even more fascinating.

To me there are some omissions on that list of 20 commercials. Let us know of the commercials which you think have been overlooked.