Michael Weinzettl on an 18-year-old Guinness ad featuring a gay couple, which was censored, never aired on TV,  yet has suddenly become an internet sensation. But did you know Lürzer’s Archive featured it back when it was produced? 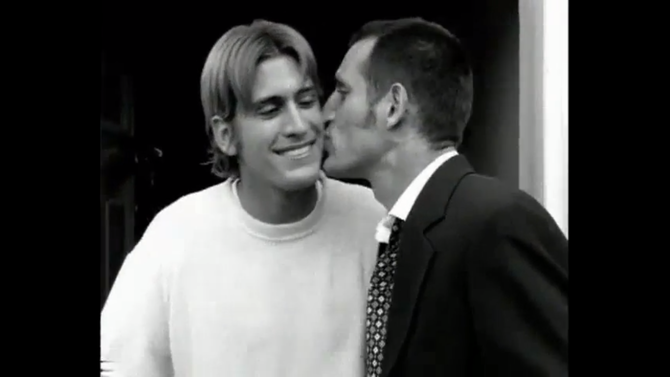 A Wider Bridge, a website for the Jewish LGBT community, last week posted on their Facebook page a 1995 British commercial for Guinness - which has apparently become quite an internet sensation. It was one in a series of three black and white spots directed by Tony Kaye 18 years ago for Ogilvy & Mather, London. The tagline: "Not everything in black and white makes sense."

Three years later, Kaye’s sensational yet troubled feature film debut, American History X, came out, now regarded as one as the top films of the 1990s.

The Guinness spot was also the one in the series that was never actually aired. It features what, at the end, turns out to be a gay couple made up of one messy business man and his partner - a stay-at-home guy who picks and cleans up after him to the strains of Tammy Wynette’s "Stand By Your Man."

Back in 1995, Guinness balked at airing the commercial alongside the other two, fearing a negative reaction from the tabloids. So it was never officially shown (if not "banned," as the postings title makes you believe). Considering how public opinion to the gay and lesbian community has recently undergone a massive shift, the interest that this classic spot suddenly received would be not so surprising, were it not that it came out of nowhere.

Another Guinness commercial from that series, called "Bicycle," did extremely well at the 1996 and 1997 award shows (including a Gold Lion in Cannes 1997.) That commercial confronts us with the feminist phrase, "Woman needs man like a fish needs a bicycle", coined in the 1970s by Austrialian activist Irina Dunn and later popularised in the US by Gloria Steinem.

We see scenes from a world in which women are seen doing what are usually men’s jobs and having lots of raucous – and certainly "unladylike" – fun. Men are neither present nor missed in this world. And the penultimate sequence is a long camera pan through an empty maternity ward. Adding to the commercial's ultimately ambiguous message is a final shot of a fish cycling by on his bike.

All this is brilliantly filmed and edited, playing to the sound of "I’m Gonna Wash That Man Right Outa my Hair," a tune from the Rodgers & Hammerstein 1949 musical "South Pacific."

Back in 1996, either Ogilvy & Mather London or Tony Kaye Films, the production company behind it, submitted all of the spots to Archive. Of course I put them all into the following issue (Vol. 2/1996) - a full year before "Bicycle" was awarded at Cannes!.

I was unaware of the fact that "Men & Women Shouldn’t Live Together" had been stowed away in some vault and never seen the light of TV. We usually try to feature only published work and agencies do know this. They might occasionally submit work that has not yet been approved by the client but then as a rule, quickly inform us if final client approval is withheld.

Anyway, the Guinness one somehow slipped by the attention of those responsible and now I’m quite glad it did - and I can say "We already featured this in Archive back when it was produced."

Another interesting thing I remember about this particular campaign is the final jury session at the Epica Awards of that year, 1996, in which the Grand Prix, or Epica d'Or as they used to call it, was awarded to the "Bicycle" spot – although not without lengthy and heated discussions.

Among the jurors, made up of some 30 advertising trade press journalists from all over Europe, there was a sharp East-West divide when it came to appreciating the commercial’s qualities.

The journalists from what at the time had only recently been countries of the Communist Eastern bloc and among them particularly the women reacted in a strangely enraged manner about the way females were portrayed in "Bicycle." I was really quite surprised about it since I would have thought that this portrayal as self-reliant and independent would surely mirror their own experience of working life.

Instead, I remember comments such as "These are not even real women!" or "So depressing, the way these 'women' are acting!" The journalists from places like Slovenia, Poland, and Russia seemed to be reacting against a kind of perceived feminist message that the commercial itself was actually much too ambivalent and layered to profess.

With hindsight, I assume that this was a cultural thing: a completely different take on acceptable displays of femininity, a kind of reverse reaction to years of a different, possibly ideologically prescribed female lead images and – at any rate – an attitude that has, in the meantime, become a fully evolved one.

Nowadays when you see young women in streets of Eastern European cities, a vast majority of them seem to have stepped out of "The Devil Wears Prada", with Vogue being their styling bible in the way they present themselves in public – something that I find to a much lesser extent in Western cities, and certainly not in Germany.

Video: Guinness "Men and Women Shouldn't Live Together" by Ogilvy & Mather made it into Archive despite never being aired.

Video: Tony Kaye's most recent film, "Detachment," starring Adrian Brody, Marcia Gay Hayden and Christina Hendricks has won lots of awards at festivals all over the world and has just come out in Germany.