Ever wanted to see the journey an ad goes on from its initial doodle? One of the UK's top creatives, Dave Dye, has shared fascinating insights into advertising on his blog. He talks about “Stuff from the Loft” to Lürzer’s Archive Editor-in-Chief, Michael Weinzettl. 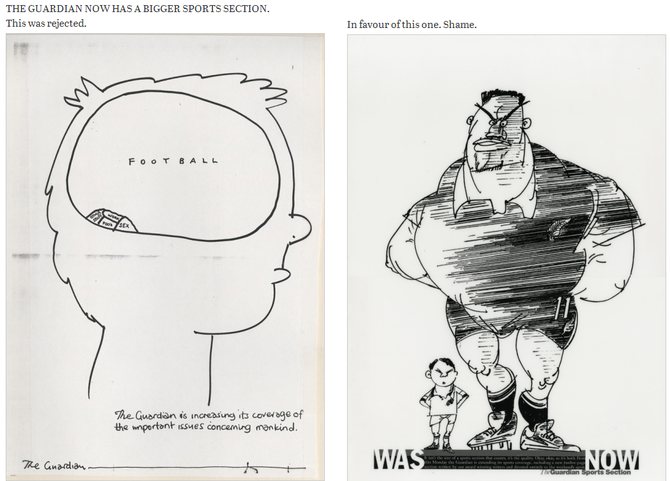 Last October  when I was at the launch party of our latest 200 Best Ad Photographers book at the Art Directors Club, New York,  I was staying near the Fashion Institute of Technology on 7th Avenue. One morning I popped over to the FIT's Museum to see their RetroSpective exhibition, which was all about fashion referencing its past.

When I saw the beautifully assembled and restored collection of clothes spanning several centuries, I had to think of how odd it was that fashion, an industry with an output that is as ephemeral as that advertising (quite apart from the fact that in terms of influence the latter very much depends on the former) appears to be so much more conscious and appreciative of its past than advertising is.

Try to call up an agency (as we often do, mostly for the Classics pages of the magazine) and get them to send you a decent copy of some of the most famous ads that agency is known for. You're bound to get someone on the line telling you: "Oh, that was way before my time. I have no idea how to get hold of that. Try the ADC/D&AD."

Then look at Rewind, the D&ADs thick volume that came out on the occasion of their 40th birthday in 2002 and marvel at a lot of the awful reproductions of older campaigns, let’s say from the 1960s and 70s, even they themselves had to make do with when they set out to collect the highlights of their awards history. (The situation is bad enough with print and poster advertising, it’s even worse with old commercials – mainly due of course to the poor quality of the original recording and copying of those.)

It sometimes seems that as soon as an account disappears from an agency's roster, the powers that be lose all interest in the work they created for it, and hardly a trace is left behind of work they once took great pride in.

Which is one of the many reasons I really like the blog put out by one of the UK’s top ad creatives, Dave Dye. His amazing work has been featured in the pages of our magazine since back in 1992.

It's called “Stuff from the Loft” and I highly recommend it to anyone with an interest in advertising creativity.

“It’s the perfect storm: a house move meets tagging-issues head on,” explains Dave on why he started the blog.

“With tagging, I discovered that studio people don't tag images like curators. An Adidas running shoes ad may be tagged 'red ad', because it's red. A Volkswagen ad could be tagged 'Man.jpeg', because there's a cute drawing of a man in it and ad for something for The Economist Untitled-348.jpeg, because it hadn't been tagged. So effectively they are all invisible in a search.

“It’s called ‘Stuff from the Loft’ as having recently moved house, I was confronted with a mountain of proofs and roughs that had taken years to stack up. I could either start filling up a loft again or bin them. Do I really need a rejected rough campaign for a product that no longer exists? My wife felt probably not, BUT, I like seeing the journey an idea goes on from its initial doodle so I thought I better scan them.”

Not only always astute, as well as frequently funny, it covers a range of interesting topics (among them a long overdue reassessment of the legacy of “Mad Woman” Mary Wells) but, most of all, provides great insight into the creative process - including trial and failure- behind many of the excellent campaigns Dave Dye has been actively involved in over the years.

As an example check out the fascinating posting from early January of this year called “Running ads", a kind of genesis of some of the classic Adidas advertising Dave came up with or helped create at Leagas Delaney in the 1990s.

“I've been touched by the feedback - people not so much saying they like it, but thanking me for doing it. It makes me glad I didn't just bin ‘all that old rubbish’ as my wife calls it.”