With the release of Dave Trott's new book, Michael Weinzettl reflects on the route into advertising and "blue collar" style of the Adland hero - "surely one of the coolest guys in the business." 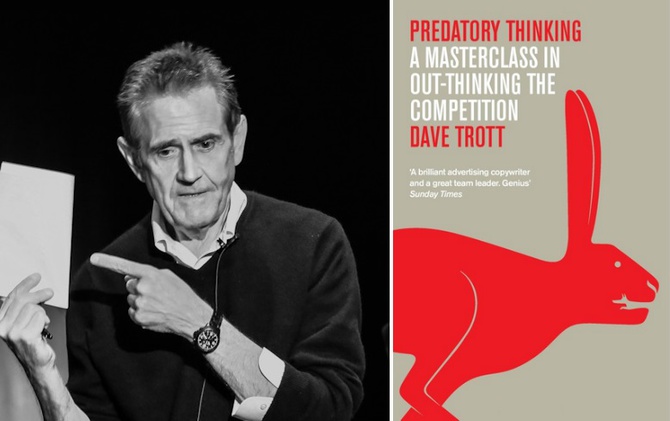 I met Dave personally only a few months ago at the jury meeting of London's Creative Circle Awards, but had been in awe of his numerous achievements for at least a quarter century.

Trott got into the ad business in the late 1960s after having trained for some years at New York's Pratt Institute, and working at the Carl Ally agency on Madison Avenue. There, he learned a fresh "punch the consumer in the nose" approach - so different from the Mad Men era way of doing ads - that would have an influence on him for the decades to come.

He then took a career detour, hiring as a deckhand on a cargo ship, and returned to his native London in 1971 via Brazil and Argentina. He got a job as a copywriter at Boase Massimi Pollitt, where he partnered with the great John Webster.

Their 1979 cooperation on the Courage Best beer account would later land the commercial "Gertcha" – now found on many 100 Best Commercials of All Times lists. Nine years later, he left BMP to found his own agency, Gold Greenlees Trott, or GGT. It became one of the major players of British agencies and was at one time voted "Most Creative Agency in the World" by Ad Age. He also founded Bainsfair Sharkey Trott ten years later.

His punchy visual style and brilliant concepts (classics like Toshiba's "Ello Tosh, got a Toshiba?" and Ariston's "And on and on and on" from 1991) turned him into an ad legend that has influenced at least one generation of ad creatives.

His work is also known for a kind of "blue collar" style which, having been born in Barking, East London, reflects his Cockney-esque roots. He himself has characterised it as "…intelligent working class, they don't mind being sold something but they like a good joke and a singalong.

"It's like The Sun. You don't have to take it deadly seriously, it's not The Guardian. Have a bit of fun, but be intelligent, don't be patronising and crass. That's what I learned in New York – blue collar doesn't have to be stupid."

Today Dave Trott is Chairman & Executive Creative director at The Gate London. He also blogs on Campaign Live and The Gate and has just published a new book: "Predatory Thinking: A Masterclass in Outwitting the Competition", published by Macmillan.

The book is basically the distilled wisdom of Trott's career over 43 years and written in the form of ongoing, brilliantly lean anecdotes and stories. The essence of "Predatory Thinking" is perfectly illustrated by the anecdote printed on the book's dust jacket:

Two explorers are walking through the jungle. Suddenly, they hear a tiger roar. One explorer sits down and takes a pair of running shoes out of his backpack. "You're crazy, you'll never outrun a tiger," says the other explorer. "I don't have to outrun the tiger," he replies. "I just have to outrun you."

I only just received my copy in the mail this week, but have barely been able to drag myself away from it since.

Video: Dave Trott's classic Courage Best ad "Gertcha" can be found in the back issues of Archive.