Michael Weinzettl takes a look at the winners from ADFEST, held in Thailand. What work was already featured in Archive?

With so much going on here at Archive – the launch of our first 200 Best Digital Artists concurring with the publication of our latest issue, Volume 2/2013, ADFEST Asia which was recently held in Pattaya, Thailand, is one of the major ad events on that continent almost slipped past us.

Of course ad festivals, major or not, are about so many other things than just the campaigns submitted and possibly awarded - but from our point of view it’s the work that counts. And as far as that goes, I can confidently say our magazine’s faithful subscribers and readers haven’t missed much.

If you take a look at the Grand Prix winners in Print (Press and Outdoor) and Film as well as the winners of Gold in these main media, there is hardly anything that wasn’t featured in Archive magazine.

Let’s take a closer look: The juries under the overall guidance of Grand Jury President Graham Fink, CCO of Ogilvy & Mather, China and last interviewed in Archive in Vol. 4/2012 (the one with the ‘Piss Lady’ cover) picked Metro Trains’ three-minute animated film “Dumb Ways To Die” by McCann Erickson, Melbourne, as their Grand Prix winner. It was our Spot of the Week 2012/48 and also made the pages of our Vol. 1/2013 issue.

A Gold Lotus went to “Beer Chase” for Carlton Draught by another Melbourne agency, namely Clemenger BBDO, and was featured by us in Vol. 6/2012. The spot is a madcap chase between robbers and policemen all trying not to upset their glasses of Carlton Draught which they keep balancing in their hands.

The background music is another case in point regarding the ‘80s being back in current advertising with a vengeance - something I recently wrote about in my Editor’s Blog.

“Insight” for Samsung Cameras by Seoul-based agency Cheil Worldwide also won a Gold Lotus as well as making the pages of Archive Vol. 6/2013. Samsung held a photography class with a group of visually impaired children. Their How to Share Smart website allowed users to experience photos captured on film with the mind “eye sight insight”.

The third Gold Lotus in Film went to a very striking black and white commercial for the Mumbai Mirror, in which various people on the busy streets of Mumbai give voice to protest issues that get reported in the city’s newspaper. “I Am Mumbai” is how they end their addresses and is also the title of the spot, which featured in Vol. 4/2012.

There was one other campaign that won a Gold Lotus, which in fact, you could not see in Archive – at least not as a film. Two years ago, in Vol. 3/2011, we showcased the print campaign for the Bayer headache remedy Saridon.

There was no commercial submitted at the time, but obviously there was one, first published along with the print campaign in late 2010 and now, more than two years later, garnering the fourth and final Gold Lotus in the Film category.

The films are in no doubt well made, yet little more than what John Hegarty once called a “print ad on wheels” (he was debunking the Doyle Dane Bernbach’s classic 1964 VW beetle “Snow Plow” commercial at the time).

The Grand Prix in the Press category went to a beautifully crafted campaign showcased in Vol. 4/2012. It’s for Bundaberg Rum by Leo Burnett, Sydney. But the win of this surreal and extraordinarily well-crafted campaign came as somewhat of a surprise to me.

It’s not an ad you instantly get - although the surreal visual on the left does make you want to find out more. This means ploughing your way through quite a lot of long copy set in antique-looking type before you get to the product’s strapline: “A rum as smooth as life is rough”. It’s an eccentric, if not commendable, choice for a Grand Prix at any rate.

The Gold winners in Press included DDB Singapore for their work for local bicycle retailer, LifeCycle (seen in Vol. 4/2012 of Archive), as well as two campaigns which I have selected for the issue we’re working on right now, Vol. 3/2013, which will be published in time for the Cannes Lions Festival.

One is for the Berlitz Language school and comes from Hakuhodu, Indonesia. The other for The Center For The Protection Of Children's Rights Foundation (CPCR) by Leo Burnett, Bangkok. The latter I first spotted a week ago when I spent a few hours wandering around London’s Olympia, looking at the submissions for this year’s D&AD awards. 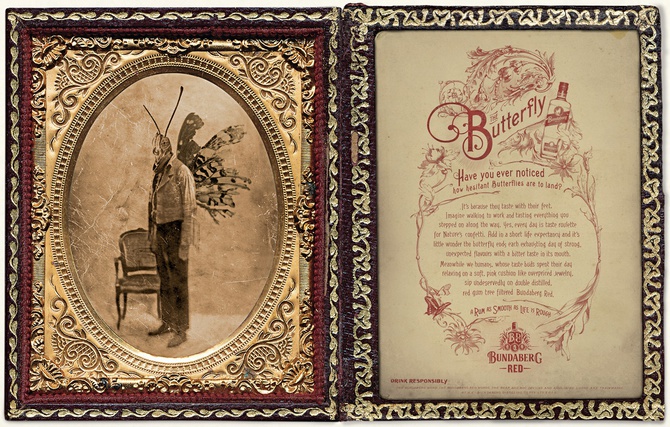 Video: Mumbai Mirror "I Am Mumbai" by Taproot, India picks up a Gold Lotus in Pattaya.

Do peruse our online archive for a closer look at the ads mentioned. | Not already subscribed? Subscribe now.