With the controversial Harvey Nichols ad appearing on the cover of the next issue of Lürzer’s Archive, I’ve been thinking about cases where the magazine – which after all gets distributed in all over the world – has run foul of certain rules of what can and what cannot be shown, and as a result never reached some of our subscribers.

Sometimes it’s just a close call as with Vol. 6/1998 where the shipment to Japan was held up at customs because the officials deemed the cover image, taken from a Kookai campaign by CLM/BBDO, Paris (which shows a tiny man with the lawn-mower working on a woman’s bikini-clad crotch) unfit for Japanese consumption. 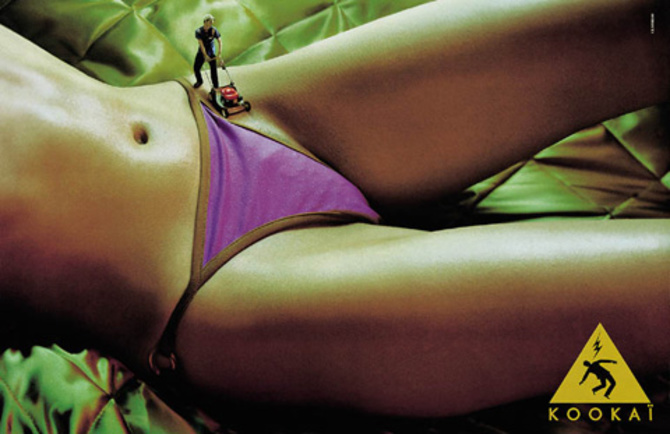 They do apparently have a thing about the display of pubic hair over there, even though just the tiniest amount of it could be seen in the photo in question. Somehow, at the last minute, however, our Japanese distributor, Erol Ishikawa from our Japanese distributor Yohan (now DIP) was able to persuade them to let the shipment through.

A much more serious fate befell several of our bi-annual 200 Best Specials in Iran. Our distributor there, Vijeh Nashr had to black out 14 pages from the latest 200 Best Ad Photographers and five from the previous volume. In each of the last two 200 Best Illustrators Specials four of the pages incurred the wrath of the authorities and had to be removed.

Probably the most extreme case was when Customs in Kuwait confiscated the entire shipment of Vol. 4/2011 . Our distributor there, Levant, also told us that they wouldn’t give any reason for their interference.

So, to this day, we’re still baffled as to why that very issue had come under scrutiny. On its cover, after all, we just see the back of an innocent surfer with his shark-bitten board. It came from a campaign for Mars bars by, again, CLM/BBDO, Paris. When I leafed through the issue, I couldn’t find anything that could be construed as even remotely obscene – unless, of course, you count the sight of Simon Cowell in a V-necked t-shirt from an ad by CHI & Partners, London, promoting the Sunday Times Rich List.

Okay, there was a little bit of nudity in a Belgian campaign for Keshett brand jewellery, the models beautifully photographed by Christophe Gilbert to look like Tamara de Lempicka paintings come to life.

And there was a Breast Cancer Foundation campaign from DDB Singapore in which there were a few nipples in sight but always camouflaged with body-painted depictions of cartoon-like girls on top of them. We have certainly featured more explicit ads before!

More easy to understand was why the cover image on the 200 Best Illustrators Special 09/10 wouldn’t fly in China. 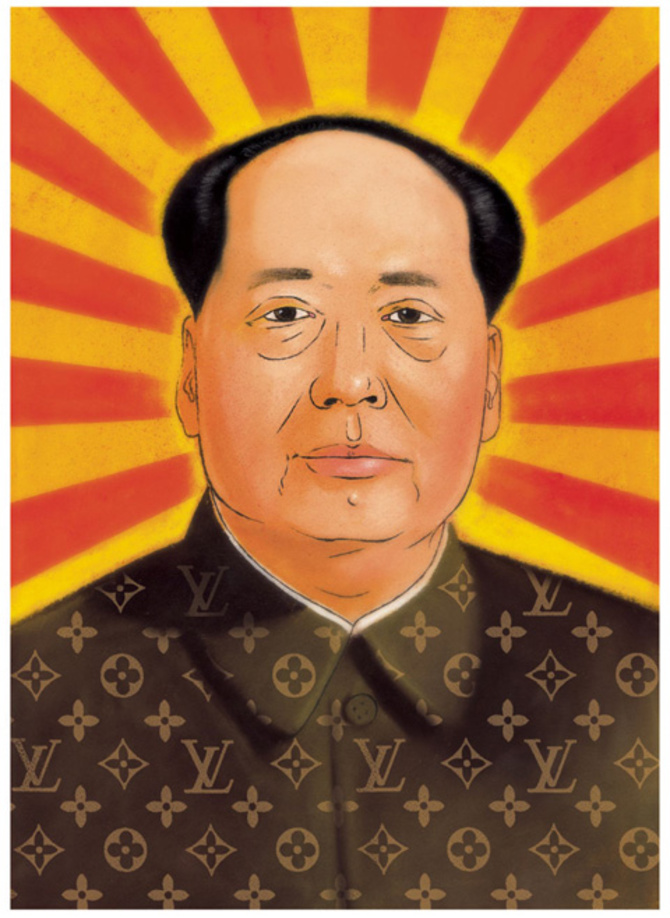 It showed a portrait done by US illustrator Edel Rodriguez of Mao Tse Tung wearing his typical jacket – albeit strewn with Louis Vuitton logos. No way could he sell a publication like that or even get it into the country, our Chinese distributor, Beijing Designerbooks, let us know in no uncertain terms. So for the Chinese market we had to have a special cover printed with a more innocuous – if just as beautiful – illustration of a diver’s face by Spanish artist Jose Manuel Hortelano.

The most bizarre cases of censorship of Lürzer’s Archive so far have involved the Texas Department of Criminal Justice Institutional Division. It has happened not only once, but twice. We seem to have a subscriber who is doing time in a Texas State Prison, and the publications he – or could it be a she? – receives are screened by the Director’s Review Committee before going behind prison walls. 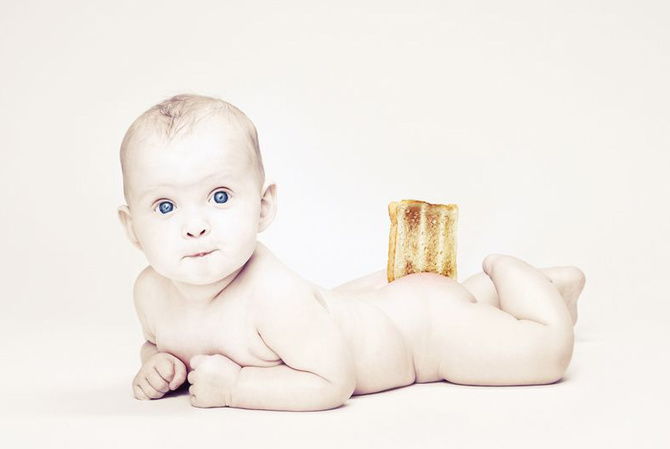 They refused to let in Vol. 6/2010 because of an ad for a cream against diaper rash featured on page 89. According to them, the ad was “detrimental to prisoner’s rehabilitation because it would encourage deviant criminal sexual behaviour.”

How one would come to such a conclusion at the image of a sweet naked baby with a piece of toast popping from its bottom doesn’t really bear thinking about. 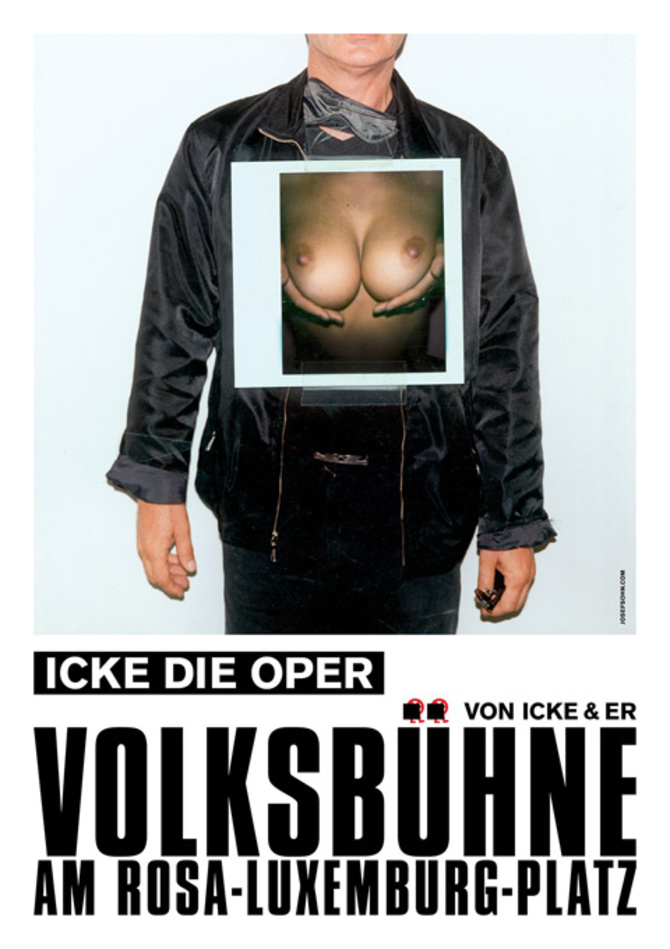 The very same Texan Prison Review Committee struck again earlier this year, with Vol. 1-12, this time because pages 72 and 81, according to the  legal form issued, contained “sexually explicit images.” The former page showed widely displayed theatre posters created by Daniel Josefsohn for performances at the Berlin Volksbühne (above). One of them featured a naked bosom.

The latter showed a campaign for Playboy magazine from Neogama BBH, Sao Paulo, but really showed just hands onto which pretty pin-up girls had been drawn, the fingers doubling as the girls’ legs… 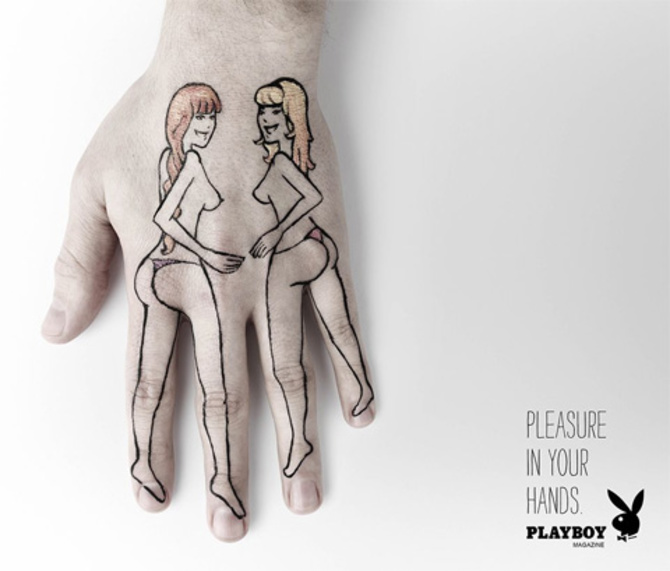 Before I go, just in case you want to write to the Director’s Review Committee of the Texas State Prison and give them a piece of your mind – at the possibly risk of being banned from entering the State of Texas as long as you live – their address is P.O. Box 99, Huntsville, Texas 77342, USA.