The country that came out on top in our Rankings, BBDO Worldwide’s David Lubars, and Stinkdigital’s Mark Pytlik on the dark art behind online advertising - Michael Weinzettl gives you the lowdown on what’s inside the new issue of Archive.

The latest issue of Archive magazine, Vol. 3/2014, is out next week and its publication of course coincides with the Cannes Festival of Creativity. Except for the fact that – as in the issues that came before – there will be a lot of work on display that I have no doubt will win major metal at the festival, there are two points of reference to previous Cannes winners; the first Titanium and the 2009 Film Grand Prix.

The first one because our interview partner this issue is David Lubars, CCO of BBDO Worldwide who won that Titanium for him and his team at Fallon Minneapolis’ work in 2003 after having it sent back by the Cannes organisers the year before.

It was 2002 and they simply didn’t know what to do with that series of short films for BMW all starring Clive Owens and directed by big names such as John Frankenheimer, Ang Lee, Wong Kar-wai or Guy Ritchie (who cast his then-wife Madonna as a passenger experiencing a VERY bumpy ride).

The films played on the web exclusively albeit using traditional media such as billboards and trailers on TV to promote them. Whatever it was that the Cannes folks had trouble categorising, it turned out to be the first viral ever to really hit big and played a substantial part in making BMW the best-selling imported luxury car in the US for the next couple of years.

Queried by Hermann Vaske back in 2006 why he took the unusual step to put the films online for the first time, David Lubars explained: “BMW was in a bit of a panic because they were having trouble reaching their customers, guys about my age who were using TiVos, DVDs, video games; …someone mentioned that 90% of our audience went online to look at cars when they were ready to buy. We thought, well, if our guy is going there, we should be there, too. It was that simple.”

Eight years later, David Lubars still recalls the shock of having his work submitted to Cannes sent back to the agency:

“I was confused and angry,” he says, “‘You’re telling me that a show designed to recognise out of the box thinking is penalising this for being too out of the box?’ Hahaha, I’m still angry about it now!”

The selection of digital work for Vol. 3 was done by Mark Pytlik, CEO and cofounder of Stinkdigital. And here, again, we have a connection to the Cannes Festival as the 2009 Film Grand Prix went to Philips’ “Carousel,” a film his company produced for DDB Amsterdam.

Among the 15 digital pieces Mark has chosen to present is also the fascinating “Behind the Banner” online tool that reveals how the digital tracks we leave on the web are used by online advertisers to assemble individual profiles.

“Behind the Banner is a visualisation of the dark arts behind online advertising. Through clever design and concise copy, it explains how innocuous web browsing contributes to an advertiser’s profile of you and ultimately dictates which ads to serve you when in realtime. It’s edifying, if not slightly terrifying.”

As for the print work on display in this issue, out of a total of 107 campaigns, Brazil this time takes the lead with 17, followed by Germany with 14 - to my surprise, as I hardly ever pay attention to the country of origin of a campaign I select.

Those two are followed in print by the UK with eight. On the whole, however, the US comes out as the strongest as they are featured with 22 films, four print campaigns and 12 digital works, thus providing 19.5% of the total editorial content.

So it is only fitting that the cover, the Colgate “Mouth” too is from a US agency, Y&R/Red Fuse in New York, albeit with major help from Chilean photographer/illustrator/digital wizard, Ricardo Salamanca.

I hope you will enjoy Vol. 3/2014 of Archive which is also the first to boast the cool new layout and type courtesy of our very own art director, Christine Thierry. 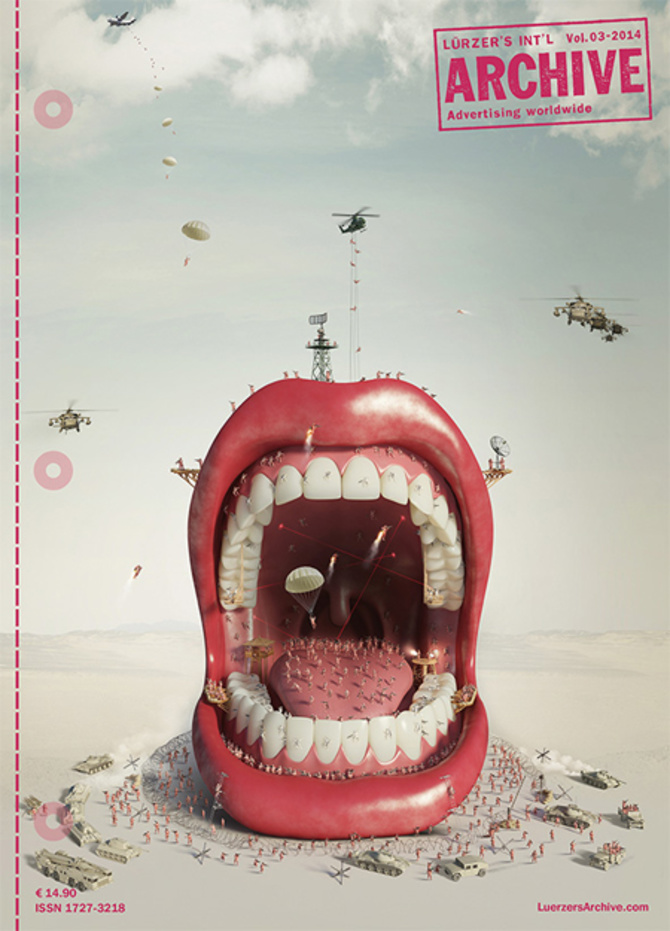