How advertising had the power to bring back old music

Michael Weinzettl takes a retrospective look at when advertising had the power to revive musical classics from the likes of Nina Simone and Marvin Gaye. 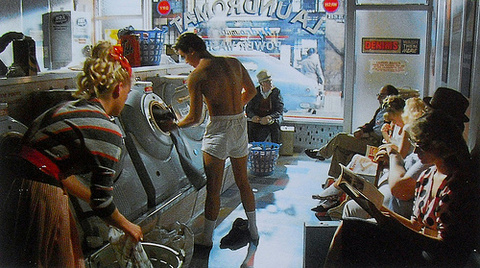 Part of my work involves looking at masses of commercials and there is a lot of music to be found in those – good as well as awful –and frequently the same old pieces over and over again. Having ever to sit through another spot featuring the Flower Duet from Delibe’s Lakmé – first famously used in the Hugh Hudson-directed British Airways “Face” extravaganza by Saatchi & Saatchi (1990) – might drive me over the edge.

Thinking about music invariably makes me remember a time when TV or cinema commercials had the power to bring back long-forgotten songs into the hit parades. From the mid-80s to the mid-90s, this certainly was a huge trend, spearheaded by BBH London with their work for Levi’s 501.  They regularly unearthed music popular with previous generations for the score of their commercials and thus pushed those songs back into the charts.

The prime example is of course the Levi’s break-out success of “Launderette”, the brain child of John Hegarty and Barbara Nokes, who had been called in by Levi’s to save the brand from its diminishing fortunes.  They certainly did achieve their aim and in the wake of this commercial, directed by Roger Lyons, had Marvin Gaye’s “I Heard It Through The Grapevine” storm the charts once again 17 years after it had first became a multi-million selling hit.

There came a string of commercials for Levi’s that used the same formula, all of them hotly anticipated by the general public and getting the jeans brand to soar to the number one position in popularity all over Europe and pretty much the rest of the world. Oddly, that was not so in their native country where Levi’s jeans were considered a somewhat low-interest basic garment, no matter how hard FCB – who've had the account in the US for ages – have tried. When it came to their pants, American consumers at the time tended to opt for something awful called “designer jeans”.

Among the many BBH commercials for Levi’s from that time that I remember is one from 1991 which featured – to the strains of 1973’s "20th Century Boy" by T. Rex – Brad Pitt in his first iconic appearance directed by Chris Hartwell. Incidentally that same year Pitt shot to international fame with his role as Geena Davis’ love interest in Thelma & Louise, directed by Ridley Scott.

Another one is the 1992 “Swimmer” spot directed by Tarsem and featuring the – at the time 60-year old – Noel Coward song “Mad About The Boy” in a 1952 recording by Dinah Washington. It immediately entered the UK’s top 50 charts – at a time when chart success still had significantly more meaning and financial consequence than it does nowadays.

Other advertisers of course quickly took up this formula as well, e.g. Chanel who featured actress Carole Bouquet in a Ridley Scott-directed commercial from 1987 and Nina Simone’s rendition of “My Baby Just Cares for Me”. “This piece of shit” as the brilliant singer, songwriter and pianist called the song she recorded back in 1958, became one of her biggest hits almost 19 years after her previous chart entry. In 1987 it went to number 5 in the UK Singles Chart.

In 1990, Jean-Paul Goude used part of a re-recorded version of the 1956 song “I Put a Spell on You” by of Screamin’ Jay Hawkins to score this Perrier commercial by Ogilvy & Mather, Paris, which won the Film Grand Prix at Cannes that year.

This formula of using hits from days gone by has been with us ever since. A very charming addition to the long list was the 2013 “My Angel Girlfriend” commercial for Lynx featuring Linda Ronstadt’s very first hit single, “Different Drum,” from 1967 – and created by none other than the agency who kind of invented the ‘genre’ back in the mid-1980s, BBH London.

Some countries, such as Germany, have stricter copyright laws than others which could mean that you won't be able to access the spots due to the music used. In that case I'd suggest that simply check them out in our Online Archive.