A group of designers have criticised the selection process for the internationally proclaimed product design prize, the Red Dot Awards. Our Editor-in-Chief looks at the controversy, plus the cost to enter your work at creative festivals. 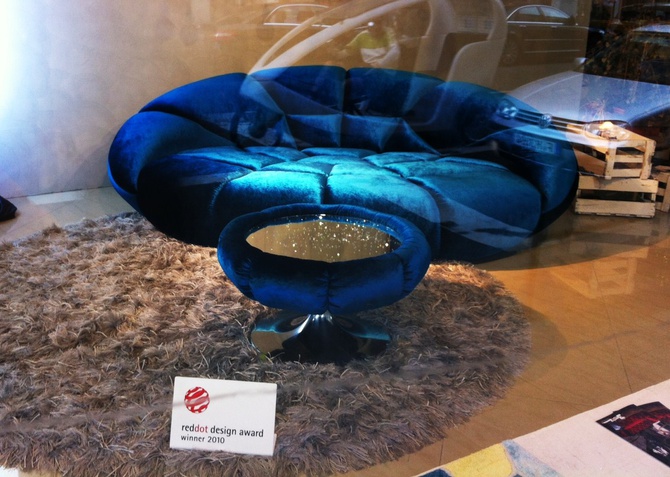 A couple of weeks ago, when I was in Frankfurt for the ADC Germany’s annual exhibition, I went strolling through the city’s centre at night. I had lived there for many years but that was a decade ago, and there was something slightly surreal and dreamlike about seeing so many old familiar sights interpolated with completely unfamiliar buildings that didn’t belong in the way I remembered them.

At one corner I was greeted by a huge, brightly-lit window of a new high-end furniture store with not much on display but a big, luridly coloured velvet sofa. It looked like a remnant from the set of Barbarella. I half expected Jane Fonda in her 1968 sci-fi-sex-kitten-in-distress mode to hover nearby.

"If I had no taste whatsoever," I thought, "I'd covet that sofa like mad." Then I looked again and saw that next to it was a placard announcing that this thing had won a Red Dot Design Award in 2010.

Which is why I had to laugh when I read earlier this week on the German 'Design Kritik' Facebook page that there was a storm brewing about this internationally acclaimed product design award, and that its founder Professor Peter Zec and the award-giving modalities of this scheme were at its very centre.

A group of designers who wish to remain anonymous have launched a critique of Zec on their recently launched (German) website red-dot-design-award. To keep the identity of the critics undercover, the domain was registered through Whois Privacy Protect, a service that ensures names aren’t listed in ICANN’s Whois data bank.

Under the heading "Jeder Dreck hat seinen Preis" which translates to "Every piece of junk has its price" (in German, 'Preis' is a homonym meaning both 'price' and 'award') and the sub-line "The ugly truth about the Red Dot Design Award", the group called 'Design-Kommando' claims that it wants to demonstrate the randomness with which the Red Dot Design Award is given out and how this damages the credibility of the design field as a whole. The page shows examples of rather bland or even hideous stuff that, in fact, won (see the banner above for an example).

"Those who believe that good design is the decisive factor in awarding the Red Dot Award to products are wrong," they write. "In truth, only the money paid to Red Dot or Peter Zec, respectively, is what gets you an award."

Asked why they wanted to remain anonymous, Design-Kommando said: "Those who are reminded of characters from Mafia films by Peter Zec and his dubious methods of 'Kiezgrößen' [procurers at the top of the red-light district hierarchy] are not quite wrong. The ones courageous enough to take a stand against such unscrupulous figures must have their identity protected."

So much, so jaw-dropping, I thought. (I met Professor Zec once for coffee to discuss a possible co-operation, and he was quite charming.) I wondered whether advertising festivals and award schemes will feel the stiff wind of opposition to their modalities in quite this way.

That money is a huge factor in most awards, be it Cannes or Eurobest, has of course been obvious for quite some time.  Agencies spend loads of it each year on fees for submitting work (not to speak of the budget spent on specially creating or tweaking campaigns that one hopes to win awards with).

You can calculate yourself, using the links below, how much agencies must cough up to have their work scrutinised and dismissed by an international jury in a process that in the majority of cases lasts less than a minute. Of course there are the books, annuals and reels that all the awards organisers use to fan the hopes of agencies of making their best work known to an international audience.

That these publications sometimes take several months to make the rounds is mentioned less often. But what made us incredulous here at Lürzer's Archive is that the Cannes people are now peddling access to their own 'Cannes Lions Online Archive' of commercials dating back to 1990 at €100 a day (€160 a week, and €2925 a year) – while a mere €139 will get you a year’s access to our very own Online Archive, going back over 25 years and including six current issues of Lürzer’s Archive magazine in which – very frequently –  you can peruse the work that wins big at Cannes many months in advance.

What do you think of the Red Dot Awards? Is the price to enter work at festivals too high? Join the discussion on our Facebook page.