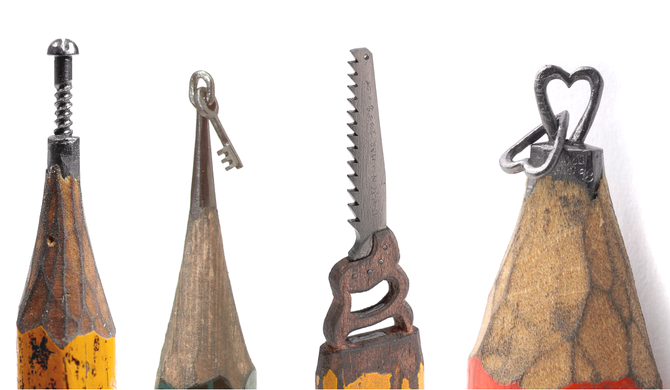 This past week the question of appropriation of ideas and styles from art for advertising once again reared its head. In response to our Print Ad of the Week posted on Facebook – from a campaign for Staedtler pencils by Leo Burnett, Hong Kong - Niclas Hellberg, a young German designer and student of Miami Ad School Europe had provided a link to his (German language) blog, in which he talks about the “lack of ideas in advertising” as exemplified by the Staedtler pencil campaign. He put it very cleverly actually, by posing it as a question: “Is it justified if an agency adapts an artist’s idea 1:1 and sells it as advertising to their own client?”

The “idea” in question is a series of works by Dalton Ghetti, a 50-year-old artist originally from Brazil now living in Bridgeport, Connecticut who earns his living mainly as a carpenter and has been creating miniature sculptures on the tip of pencils for some 25 years. With the help of a razor blade, sewing needle and sculpting knife (and without the help of a magnifying glass!) he sculpts beautifully detailed works such as a statue of Elvis or a saw, for which he used both the wood and the graphite from a single pencil.

Although I do welcome and appreciate our readers and Facebook fans’ responses very much, Niclas Hellberg’s Facebook message left me very slightly exasperated, as you might be able to tell from my immediate response to it: “For the 100th time: Advertising is not art. Art is art. Whatever Mr. Ghetti's intention might have been... I'm sure it wasn't to sell pencils!...”

In the meantime, I’ve discovered that according to The New York Times, although Dalton Ghetti sells postcards and posters of his art, the actual miniatures are not for sale; he keeps them or gives them away to friends. But Staedtler do sell pencils and so it is quite appropriate for the creatives at Leo Burnett, Hong Kong - in fact quite brilliant I think - to pick up on this and use it in their campaign which bears the tagline “Where it all begins.”

I contacted Adrian Lam, one of the Creative Directors at Leo Burnett, Hong Kong, to tell him about the whole thing and got back this very interesting email, which included the brief and solution for the campaign:

“Brief: More and more, the younger generation has succumbed to the convenience of digital technology and forget the more inspiring way of generating ideas - pencil sketching. Staedtler intends to revive the memory in people of where designs originally begin - a sketch pencil.

"Solution: By borrowing classic design icons in different categories, we show how these classic designs were born from pencil sketches by magnifying and crafting Staedler’s pencil tip graphite into microscopic miniatures of these icons.”

And, most importantly, he added:

“The creative team did contact Mr. Ghetti in March before we started the executions as we believe it would be great if he can help us on the final visuals. Mr. Ghetti loves the idea, just that he would not feel comfortable to take any commissioned work; he really would like to focus on his art which comes from his heart. He did mention this Staedtler campaign’s concept is very different from his work. His work is purely art, yet he is very glad that his art pieces inspire other design/advertising works.”

Ghetti’s name does actually appear in the extended credit list, which leaves me with the question as to whether in the future we will see more open acknowledgements by agencies who use the style  - not the concept! – of artists and whether we at Archive should start thinking about a symbol for “Acknowledged and Supported by: (Name of Artist)”.

In the meantime, thank you to Niclas Hellberg for bringing this interesting debate forward.

Image: Staedtler "Where it all begins" by Leo Burtnett, Hong Kong, which featured as our Print Ad of the Week 2012/19.

What do you think about the use of art in advertising? Join the conversation on our Facebook page.