Michael Weinzettl selects his ten favourite print ads of 2013. Vote via Twitter for your favourite for a chance to win one of five limited edition Lürzer’s Archive calendars.

It’s the time of the year when the web seems compelled to give their ‘best of’ lists. I tend to get a bit tired by these, especially when they come as a ranking that more often than not seems a bit random - basically just personal opinion decked out with spleen.

(See US film critic David Ehrlich’s Top 25 films of 2013. It’s an excellently done compilation of scenes from the best movies of the year but highly questionable as for the 25 to 1 ranking. Baz Luhrmann’s “The Great Gatsby” a better film than Noah Baumbach’s “Frances Ha”? Bigger? Yes. A lot more expensive? Sure. More “relevant” in terms of the pop-cultural context? Perhaps. But better? Really? – I don’t think so.)

So, instead of an end of the year list in which I give you a possibly bewildering top ten ranking of international ads I’ve selected the ten Print Ads of the Week that I particularly enjoyed over 2013 and will ask YOU to pick your favourite among them. 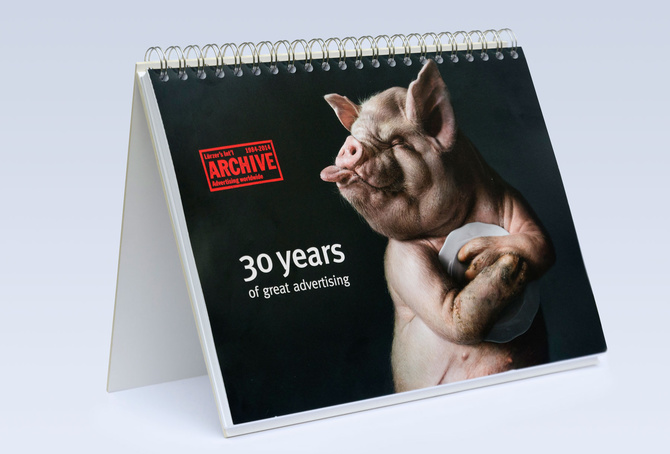 How to vote: Tweet us your favourite ad at @LuerzersArchive with the #ArchivePrint2013 hashtag. You could win one of five calendars.

My enjoyment in terms of idea and craft was pretty much the only criterion for choosing them. They are all outstanding ads, otherwise they would have no place in our magazine – and I tried to stay away from those that have by now perhaps been somewhat overexposed, as a result of winning big at award shows (that Apple iPad mini campaign again that won the Print Grand Prix at Cannes this year? I’d rather pass) or having been in one of our choose-the-next-cover contests.

At any rate, you won’t have to vote for nothing. Participants in this contest await the chance of winning one of five of our much-coveted 2014 Lürzer’s Archive Calendars - a collection of 52 striking images from the magazine's 30-year-history.

“For difficult little people,” says this ad for the Playtex brand of pacificers.

This ad for Chicago’s Field Museum promoted its “Creatures of Light” exhibition, which explores the world of light-producing organisms.

An attempt to convey Parkinson’s Disease on a poster with this print ad for a UK support and research charity for those affected by the condition.

“For workache,” says this ad for Aspirin.

"Let your food taste like food,” says this ad for LG’s Lightwave microwave and grill oven.

This nostalgic image for Açik Radio depicts people as musical notes in this photomontage of pictures taken in 1952 by Harold Feinstein, who agreed to lend his work to the station's campaign.

UPDATE: Voting ended. You chose Açik Radio "Music of the People" as your print ad of 2013.