THE ART OF SPORTS PHOTOGRAPHY

It’s an unpopular admission especially at this time, but I’m not a football fan. Actually I avoid watching any kinds of sports. On the other hand I do love sports photography.

To me the very best of it is as poetry is to (epic) prose. I really admire the way sports photographers in their best work – by  people like John Huet, Steve Bonini, or Martin Sigal, just to name a few -  can condense the sport they are capturing to something very essential and, well, poetic.

In the field of sports photography, Hamburg-based Paul Ripke, has created quite a reputation for himself. Paul is known for his eye-catching visual style created in his own photo studio and on location in ad campaigns including Nike, the German national football association (DFB) and Telekom.

His inspiration comes, he says, simply from things that happen around him and his motivation to see every part of the world. He always carries his Leica with him and captures the world as he goes, from exotic landscapes to children that play on the street.

Paul was recently invited to join Fotolia’s TEN Collection. The creative project of the stockphoto agency started in 2011 and follows an educational approach: Internationally known digital artists show their skills in an artwork exclusively created for Fotolia.

For the new TEN season, Fotolia has brought graphic designers and photographers together to create an artwork as a collaboration. Paul partnered with the British illustrator Nik Ainley: He shot the multiple wakeboard champion Freddy von Osten in action and Nik transformed the photo in a futuristic scenario, displaying the setting of the Hamburg harbour and a city underwater.

On a side note, a campaign for the Hamburg Freezers ice hockey team, which Paul created for Leagas Delaney Hamburg (featuring in Vol. 1/2012 of Archive) already foreshadows the strong digital imaging aspect of this recent work, which I certainly hope will be among the selections the Lürzer’s Archive 200 Best Digital Artists book which is expected to be out in November 2014.

According to Ripke, the image that resulted from this collaboration and entitled with the title “Surf in the City” is a beautiful example of teamwork: “Diversity always helps achieve better results,” he says, and collaborating on the TEN piece is a good example of this. One of the main reasons he became involved in the project is because he enjoys working with people from different countries, and loves combining styles in order to create something unique.

In the end Paul believes that, no matter which part of photography you actually do, it comes down to three things: a good idea, a good picture and post-production, which pushes the limits of photography to the next level. 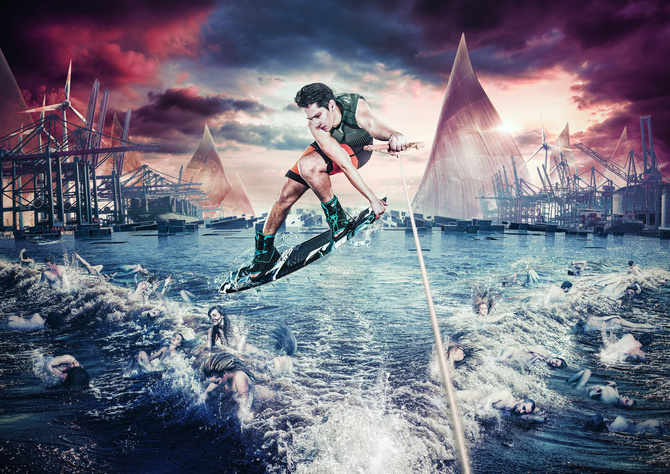 The open PSD file of “Surf in the City”, complete with layers, filters, camera settings and photos taken by Paul Ripke and Fotolia images used to create the piece, will be available for free download for a limited time on the Ten by Fotolia site. Paul Ripke's portfolio can be visited here and you can watch the making of Surf in the City here.