THE LATEST CAMPAIGN FOR CHIP AHOY!

“To provide it with such a sweetly anarchic personality is something that I haven’t seen in a long while.” – Editor-in-Chief Michael Weinzettl on the latest campaign for cookie brand Chip Ahoy! 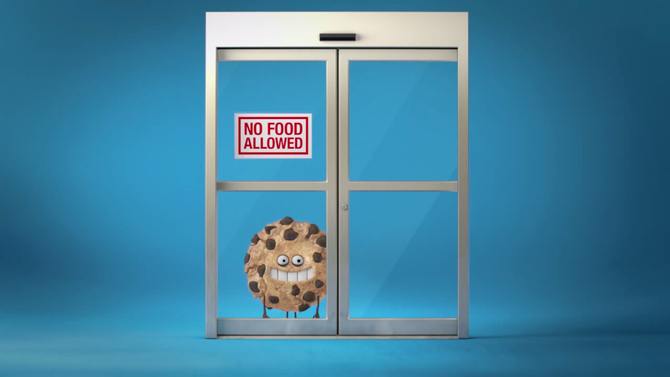 Concerned parents and advocate groups who would like to see advertising to children curtailed should probably be up in arms against this recent US campaign for Chips Ahoy! cookies by The Martin Agency, Virginia. The slightly mischievous tone the brief ads, starring animated chocolate chip cookies strike, is bound to be irresistible to the slightly anarchic spirit common to a lot of children - of all ages I should say.

The campaign started out with a teaser, filmed in a hidden camera docu-style, featuring a pack of Chips Ahoy! on a supermarket conveyor belt which seems to come to life, giggling and wriggling, thus scaring the hell out of the unsuspecting shoppers. “They are coming,” a super informs us, and “Prepare yourself for something little 3-10-14.”

In the three short and sweet commercials that followed after the launch date, an animated chocolate cookie appeared, a character tempted to break a rule where he can find them. He disturbs a “Do Not Disturb” sign, walks through a door labeled “No Food Allowed” and promptly turns off a boom box that is playing a song with the lyric “Don’t stop that music.”

A longer spot in the campaign introduces new varieties of the brand under the name Chips Ahoy! Ice Cream Creations, which come in four flavours: dulce de leche, mint chocolate chip, mocha chunk and root beer float. This one features four cookies side by side.

One of them slurps a milkshake so fast that he gets brain freeze and transforms into a mint chocolate chip cookie; the three other cookie characters follow suit and suck up their milkshakes to turn into the other Ice Cream Creations flavors.

“Really dumb and kind of perfect,” is what Gabriel Beltrone of Adfreak called them and to me this pretty much sums up the campaign for me. Chip Ahoy! are apparently the best-selling US brand of chocolate chip cookies in the US and the number two when it comes to cookies in general.

Only Oreo cookies, whose advertising won a lot of praise in the previous year, are even more popular, and a brand that also belongs to the Mondel?z International (formerly Kraft Foods) company. Both accounts are currently firmly in the hands of The Martin Agency.

It is of course one of the oldest tricks in the business to animate the product that is advertised. To provide it, however, with such a sweetly anarchic personality is something that I haven’t seen in a long while.

To me these new commercials – allowing for big differences in product and target age group of course – seem to me to like distant relatives of the much-awarded Peperami sausage campaign (“Peperami. It’s a bit of an animal.”) by DLKW Lowe, London, that took UK ad breaks by storm 20 years ago. (Our online editor Rhia Chohan  – who was in fact a child back then – however claims that as a result of the ads, she always thought that Peperami was a brand of dog food. Go figure.)

"We are reintroducing Cookie Guy as part of our new campaign, as we celebrate the 50th birthday of the Chips Ahoy! brand," says the brand.

"Cookie Guy has been part of the Chips Ahoy! brand on and off for a number of years. He first debuted in the 1960s as a live-action character, and was referred to as the Cookie Man.

"He first appeared as an animated character under the name of Cookie Guy in the early 2000s. In 2010 the brand transitioned the Chips Ahoy! creative from animation to a live- action campaign, and Cookie Guy was not featured in those marketing efforts."