Michael Weinzettl talks to Tomi Lahdesmaki about his project that has been getting a lot of attention: Forage Press, a journal that invites creatives to contribute original artwork inspired by musical subjects. 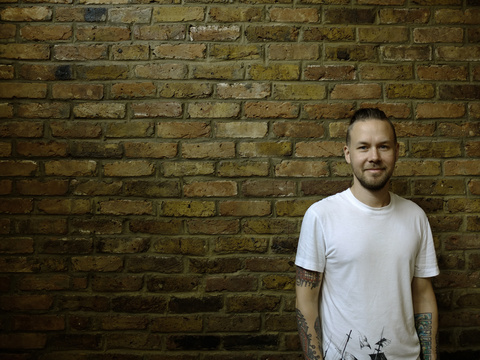 One of the cool things about working for a magazine that is in its 31st  year – although it does occasionally make me feel ancient – is to watch the second generation of artists from the same family making a splash. As is the case of designer and illustrator Tomi Lahdesmaki, an associate creative director at UK design studio, Code and Theory.

He’s the son of one of the top advertising photographers, Markku Lahdesmaki, whose work first featured in Archive more than 20 years ago when still based in his native Finland – where Tomi was born and raised.

The campaigns Markku has shot have appeared in Lürzers Archive ever since; the magazine as well as the bi-annual 200 Best Photographers special. He’s now based in Malibu and his work for the Snickers campaign was showcased only a couple of issues ago. I had the pleasure of personally meeting him and his charming wife at the Lürzer’s Archive 30-year anniversary bash at the ADC New York in September last year.

Tomi himself is a graduate of the Academy of Art University in the San Francisco Bay Area – and his work as an illustrator under the nomen Theouterone - a multi-media mix of “collage, photo montage, fantasy, poetry, mythology and good old rock” - was featured in our 200 Best Illustrators Special of 2007/2008.

He now lives in Hackney, London, where in 2013 he founded Forage Press, a print and online journal that invites creatives to contribute original artwork inspired by musical subjects, a project that has been getting a lot of attention.

Chatting with Tomi I wondered if anyone could just contribute work to Forage Press that fulfils the criteria (visual representation of music)?

“Most of the current contributors were selected and curated by me,” he told me. “The brief is certainly open to anyone and we’ve had a few people contact us to contribute and those people are currently working on articles. The main thing for me is to look for a range of creatives so that there is no specific style to the articles. And at the end of the day I try and seek out contributors who have work that shows that our brief is something that they would be interested in.

“We have an extensive master list of current contributors, currently working artists, people I have contacted and people I will contact. This list is always growing and evolving and I scour the web for creative who I think would enjoy the Forage Press brief.”

Asked if there was a cost involved for the artist contributing or whether like Archive magazine curated work was featured for free he told me that the feature does not cost anyone anything and viewing all the articles is free.

They have also published a few digital specials through the ReadyMag platform as well as a printed zine that showcases the first 20 articles from the project. Online they publish one to two new articles a week. (Tomi does all this as besides his job as a creative director.) A printed zine, he told me was only published once more as an experiment and promotional item.

Asked about Forage Press’ future plans, Tomi told me that they are about the launch a Kickstarter campaign very soon for a book about the project.

“This book will be a special curated collection of articles, roughly 70-80, which represents a range of creations. Ultimately it is a celebration of the project. The book will also contain special articles and interviews with German based design studio HORT as well as London based Studio Moross. Special Kickstarter packages will include limited edition artwork, posters, shirt and a digital copy of the book.”

"The Noise of the Shaking Land" by Pianofuzz. Click image to see full artwork.

Banner image: "In the Mood for Dancing" by Andrew Khosravani