UNVEILING THE COVER FOR VOLUME 2/2014

“Unsettling and challenging” is how Mark Forgan of Parisian agency Rosapark, describes their work for Innocence en Danger, a global NGO to protect children from sexual abuse.

The unsettling part - brilliantly executed - is exactly why we couldn’t resist to put one of their human emoticons on the cover of Vol. 2/2014, the magazine’s new issue.

The campaign features internet chat icons in human form, to warn parents and young people about the adult predators who might be behind online conversations. "Who's really talking with your child?" asks the headline.

“Case studies by Innocence en Danger show that predators will often assume a false online identity, posing as children in chatrooms and on social media to befriend and win the confidence of their target,” says Mark Forgan, who with copywriter Jamie Standen was one of the two creative directors to work on this quite extraordinary campaign.

“Their goal can be to solicit images of the child, or even worse - to arrange a meeting in real life and perpetuate a sexual crime.

“To pose as a child, they adopt the online language of children: Abbreviations, slang, and emoticons. This observation served as direct inspiration for the campaign - what if there was a way to show the danger that can be hiding behind a seemingly innocent emoticon?

“We also wanted something that would circulate on the internet itself and be seen by the online audience of parents and teens we were targeting. The images would be grotesque; perfect for the internet.

“Once we settled on the idea of showing human emoticons, we had to choose what kind of people to feature. This is an important part of the message; the profile of an internet predator varies far beyond the stereotype of the 'dirty old man'.

The work was carried out by the studio Méchanique Générale in Paris. Each image was first constructed in 3D, and then 'skinned' with material from photographic reference.

“We quickly decided that the idea would only work if the proportions of each face matched exactly those of its emoticon. This raised a challenge - we soon realised that the scope of the project was beyond a simple image manipulation and that some heavy duty resources would be needed.

By building the faces from scratch, the team were able to have images at an astonishing definition. The images are available on the Méchanique Générale website, where it's possible to zoom in close enough to see the pores on the skin. 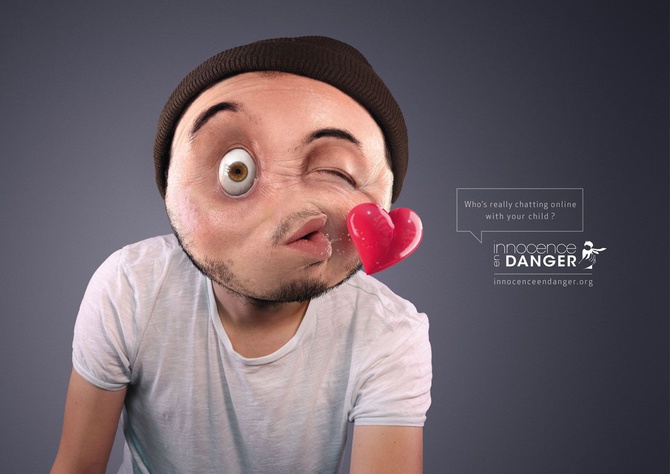 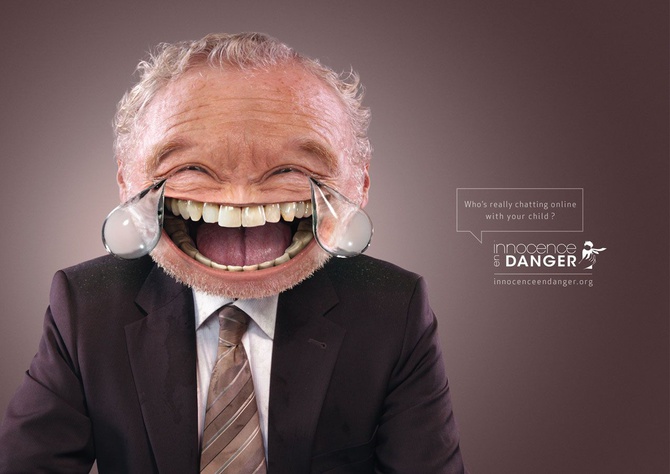