BBH London comes out on top in Archive’s agency rankings.

I don’t know about you but towards the end of each year I tend to get a bit fed up with all these Best of the Year lists that jump out at you every time you open a magazine or go to any just about any website that deals with films and other forms of popular entertainment.

Either you read the same names everywhere or the writers try to impress you (and their peers) with their esoteric tastes, meaning you‘ve never heard about the stuff they deem to be the year’s supreme achievements.

Luckily for you, Lürzer’s Archive doesn’t need to do a Best of the Year in Advertising  list. You can see it all there in our Online Ranking which is based on the number of campaigns by an agency published in the magazine over the past year. Since campaigns always come with creative credits (art, director, copywriter, photographer, illustrator, production company, commercials director, etc.) you can get quite a good view of the top talent in these disciplines.

Our subscribers can click on any of the names published in this Ranking where they are led to a page with the agency’s or creative’s contact details and a link to their work published. Our Ranking also allows you to find out the “best” of the past three years, five years, ten years, and even overall, (which means no less than the 28 years we’ve been around). I think this is a pretty unique feature for a magazine - at least I haven’t seen anything like it in another publication for the creative ad industry.

We’ve had this Ranking on our website for more than ten years now, but only with the first issue of this year did we start to include creative directors as well. Now that the year with its six issues of Archive published is over, a look at the creative directors ranking reveals that the big winner in this category for 2012 was Jeremy Craigen of adam&eveDDB, London (also our interview partner in Volume 6/2012).

He was responsible for no less than 15 campaigns. This is an astonishing number and with it Jeremy leaves the competition far behind. In second place we find ­­­three creative directors with six campaigns each published over the past six issues of Archive: Luis Sanchez Junior of AlmapBBDO, Sao Paulo, David Kolbusz of BBH London, and Fernando Nobre of BorghiErh/Lowe, Sao Paulo.

BBH, London topped our agency Ranking once again – as it has done over most of the past 25 years - only ceding their number one position to German agency Jung von Matt in the five years ranking and sharing their top position with another London agency, RKCR/Y&R  in 2011. Their work over 2012 included ads for Axe, British Airways, Audi and the Guardian.

You can check out who’s on top of their game in art direction, copywriting etc. by clicking here. I would just like to mention the number one position in the photography ranking:  It has been, forever held by the great Nadav Kander (he tops the overall, the ten years, five years, three years and last year ranking as the number one photographer).

In 2012, for the first time, Kander was overtaken by another:  Belgian photographer Christophe Gilbert had lent his enormous talents to a total of eight campaigns that appeared between Vol. 1 and Vol. 6 of Archive in 2012. Fancy your chances with 2013’s Rankings? Take a look at my previous post on making it onto the pages of our magazine.

All that sways the Archive Rankings is the quality of the work (as agencies and creatives don’t pay a penny to submit their ads) so who knows what this new year has in store for us... 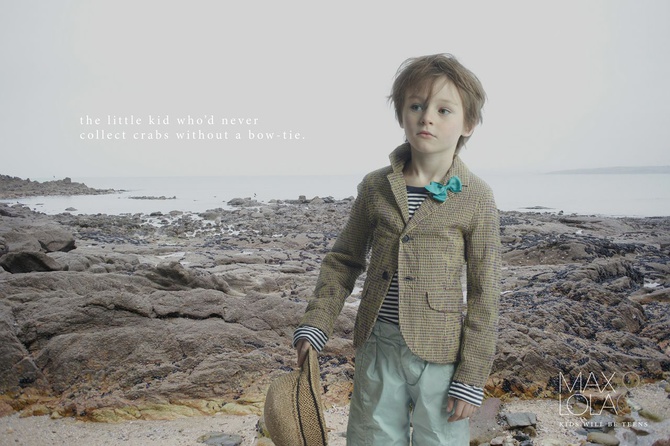 Image: "The little kid who'd never collect crabs without a bow-tie" from the "Kids will be teens" campaign by Saga, Brussels for children's fashion label Max & Lola. Photographed by Christophe Gilbert. Featured in Vol. 2/2012 of Archive.