Take a look at the work from 2015’s Saatchi & Saatchi New Directors’ Showcase, a Cannes Lions institution which marked its 25th year. 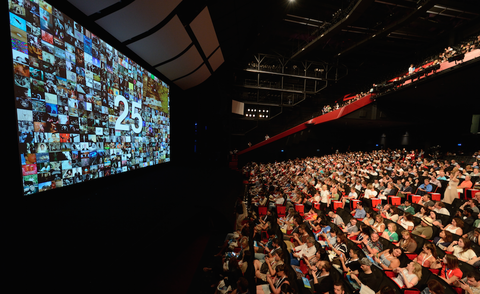 At this year’s Saatchi & Saatchi New Directors’ Showcase there were no theatrics. No props, no speakers and no nurses giving out biometric wristbands as with previous years. In its 25th year, Saatchi & Saatchi relied on the names and its rich archive within the NDS, and called upon their alumni to engage in an experiment in film “that allows focus to rest solely on the screen”.

Saatchi & Saatchi invited 25 directors to answer the brief: to create a 60 second film, end their film with a prop from their original Showcase film, and start their film with the preceding director’s prop. The unique result is “25x25: An Experiment in Film” which Robert Senior, earlier on in the week, claimed that Saatchi & Saatchi were advised not to attempt the experiment. However, the project went ahead and the screening before the NDS last week is supposed to the one and only screening, which means we unfortunately can’t share it with you.

Michel Gondry is among the NDS alumni

Significant applauses went to Michel Gondry’s vignette, as well as Jonathan Glazer’s abstract effort which flicked between scenes of a hammer and lightbulb in short bursts and rhythmic fashion. Ringan Ledwidge cameoed as a waiter in a hilarious scene where a "Jew Jitsu" athlete and a "Judo Priest" battle it out.

Following what was the only ever screening of “25X25” was the NDS Class of 2015, a Showreel of 14 young directors currently making waves in the film industry. This year’s showreel didn’t contain any traditional advertising, whilst half of them were music videos.

Helmi unveils a video where aestheticism and humour merge into a stylised direction. The rhythm of the song and the direction allow the director to create visual frames between winter sports and surrealists situations inspired by the eighties.

“I was interested in making a film that took place entirely on a bus, because I was intrigued by the idea of buses as socially dynamic spaces that can reveal something about society,” says Elizabeth. “When I heard and read about the ‘Hotel 22’ phenomenon, I saw the world on this bus as a microcosm of the profound inequities and injustices within Silicon Valley and perhaps the nation at large.”

“The concept for the video came from hearing about the band’s actual do-or-die choice of all quitting their jobs the same day to move back in with their parents, and fully commit to the insane life of a touring punk band,” explain the directing duo. “We love classic coming of age movies like Stand By Me and Over The Edge, and wanted to make these kids just as tough and powerful as the real life band members. Something that was super exaggerated but also raw and kind of real.”

The performance in this experimental film is centred in an eloquent choreography that stresses the desire to be expressive without bounds. Motion data was captured using inexpensive sensors and that data paved the way through an extensive number of steps. Once all the scanned point cloud data were combined, they were used as the base for the creative development on the piece.

Fashion merges with chemistry in this film of transformation for Garage Magazine, showcasing a number of looks from the SS15 season.  Each dress worn by Lindsey Wixon is taken forward in organic shapes and structures, the garments themselves becoming the origin of each new chemical reaction.

The narrative follows the life of a drone living in a totalitarian system, medicated to think, feel and function. A dystopian short featuring incredible VFX. Inspired by sci-fi and futuristic fiction classics such as THX-1138, Brave New World and 1984, the video is set in an alternative present and illustrates the collapse of an amplified consumer society.

A delivery gone seriously wrong. This animated video proved popular with the audience, getting all the laughs.

A moody, atmospheric tune, backed up by an equally intense music video, which follows the last minutes of a dying man hovering between conscious and unconscious worlds, battling the demons of his past before he moves on.

Inspired by John Stezaker's collages, this psycho-sexual naughty horror story is a visual exploration of modern romances, and games of seduction.

Photographer Ben Moon and his dog Denali had an incredible connection that became almost spiritual when each suffered life-threatening illnesses. Ben Knight captures this bond between man and animal, which had people wiping the corners of their eyes.

The colours and brilliance of the streets of Tokyo completely take over the eyes, the soul and all the senses in this fluid and extraordinary creation from the 24 year old photographer and filmmaker. Shot on the streets of Tokyo, the L$D video experiences a whole night in one, both good and bad. It’s a seamless transition through the mind.

“The concept of Unconditional Rebel was simple: shoot an entire film in a single ultra slow motion (1000fps) shot,” explains Guillaume. “We wanted to stage different scenes that followed one another like a mural, creating the sense of the characters almost being frozen in a decisive moment, symbolic and dreamlike.” The shot itself lasted 5.2 seconds

“I wish I had a more interesting story to tell about the origins of this short,” says Eric.  “But the truth is that the idea sprung fully formed from the genius brain of Kevin Tenglin, and when I read it I immediately knew that I had to make it.” The comical film reveals the inner thoughts of a saloon full of lying, cheating sexual deviants, and had the audience in the Palais laughing en masse.

The music video features Mustang Wanted, a Ukrainian urban free climber whose fearless exploits take him up some of the highest buildings on earth, without ropes. Or permission. Though the shoot was set to take place in the Ukraine itself, military action in the Crimea led to Kiev being declared unsafe for foreign music video crews, and production moved to Belgrade.