Paco Conde, the man behind the selection of this issue’s Digital content, is often quoted saying that he has been lucky enough to have lived four lives. He began his career in his native Madrid at Contrapunto and later worked at Y&R, Saatchi & Saatchi, and as creative director at Mrs. Rushmore.

The good news is that print ads can have other formats now.

In 2011, he left Spain to work as Executive Creative Director at Ogilvy Brazil, which he helped become Agency of the Year at Cannes 2013. He then changed continents again by going to London, where he arrived in 2015 to become Group Creative Director of the legendary BBH. His next move was to become Executive Creative Director and partner of Anomaly LA before going on to found Activista, a creative company committed to generating social, economic and cultural change through the power of its ideas. Michael Weinzettl queried Paco about his astonishing career, during which he has worked with some of the world’s most iconic brands such as Dove, Coca-Cola, Axe, Absolut, PlayStation, Ray Ban, British Airways and Google, among many others.

Thanks very much for curating the Digital content for this issue of Lürzer’s Archive. Can you tell us about yourself and Activista, the Los Angeles-based agency you founded in May 2018. What kind of services does Activista provide and how have the first 16 months gone for the new agency?
Alice Walker said “Activism is the rent I pay for living on this planet.” After over 20 years working in big agencies across the world, my partner, Beto Fernandez, and I decided that we wanted to pay that rent for living on this planet not just with our actions, but also with our talent and careers.
That’s why we opened Activista, a creative company committed to driving social, cultural and economic change through the power of our ideas. We make brands famous for making a difference. We offer what we call extraordinary ideas: breakthrough, culturally resonant, game-changing, transformative ideas. Our first 16 wmonths have gone very fast. We have changed the way we operate, the way we create, and the way we collaborate with brands. We’re more entrepreneurial now. We believe the acts of a company are much more powerful and important than the ads. And we have decided to work only with brands and organizations that want to leave a positive impact in the world. A true reset.

Why did you decide on Los Angeles for your base? You’ve worked in London, Madrid and São Paulo before that. Were there any big differences in working in these places?
LA is the city where the most interesting people and companies in the world are doing the most innovative work. There are so many people pushing the boundaries of so many industries. One day you meet someone who works at Elon Musk’s SpaceX program. And the day after you have a coffee with someone who is developing an app that is going to change everything. It’s a city that encourages you to be more adventurous and entrepreneurial. LA is also one of the most progressive cities in the world and the Silicon Valley of social impact.
I’ve been lucky enough to work in different markets and lived in wonderful cities. In London, you can work with the best of the best. John Hegarty said, “Advertising is 80% idea and 80% execution”. And that’s exactly London. The best craft is there. Brazil is all about passion. You don’t have the big budgets that you can have in the US and the UK, but they have a massive passion. And trust me, sometimes passion is more important than a big budget. And finally, Spanish people are so talented. Think about all the Spanish painters, poets and writers. Creativity is in our DNA.

Where did you grow up, where did you go to school?
I was born and raised in Madrid where I lived the first 36 years of my life. My home, family, friends and job were there. But I always wanted to live abroad. My idea was to move to NYC so I called my old friend Anselmo Ramos, who had lived there. I asked him to give me the contact details of some recruiters and headhunters and he got back to me with an offer to join his team at Ogilvy in Brazil. Lucky me, my wife accepted the new plans and we moved.

Was advertising a field you had always wanted to work in?
I don’t know why, but I’ve always loved advertising. I used to record music videos and cool ads with my VHS videorecorder when I was younger and watch them again and again. I loved Coke, Nike and Levi’s commercials. Then, I decided to study for a degree in advertising. While I was in my third year at the university, I got my first job at Contrapunto BBDO, Madrid. It’s been 25 crazy and amazing years since then working in four different countries. I owe so many things to the industry.

Do you remember any key moments when advertising became special to you? When growing up, was there an ad or an ad creative that impressed you in particular?
I’ve always loved music and music videos. Thinking about it, perhaps I started to be interested in advertising when TV ads started to look more like music videos than ads. As I said, I used to record the ads that I liked to watch them and analyze them. The brands behind those ads were Levi’s, Nike, Coke … it was the golden age of BBH and W+K releasing stunning ads every year.
For me, watching a Levi’s ad was as exciting as watching a Nirvana music video. So probably my first idol in advertising was John Hegarty and BBH even before I knew their names.

How did you go about achieving your goal or founding an agency on the West Coast of the US?
Carl Johnson and Mike Byrne, founders of Anomaly, told us that they were thinking of starting a new venture. Their thought was “If we opened Anomaly today instead of 14 years ago, how would that agency look?” They asked me and my partner if we’d like to found that company. Think of a name, a positioning, a philosophy … After thinking about it for 0.000001 seconds we accepted the challenge.

Who are some of the people that you looked up to when you started out?
I’ve always been an ad nerd. I still remember the credits of the campaigns that I saw in Lürzer’s magazines and the D&AD and One Show books 20 years ago. Tim Delaney, John Hegarty, Goodby and Silverstein, Mike Byrne, Nick Gill, Jamie Barrett, Neil French, David Abbott, Dave Dye and Sean Doyle, Paul Bedford and Nigel Roberts, Tom Carty and Walter Campbell, Bob Barrie, Luke Sullivan … I think I was lucky to start working in advertising before the digital era because there is no better school to build your criteria and learn about creativity than with traditional print and TV ads.

What are some of the projects over the course of your career that you’re proudest of? In Archive we were able to feature a total of 21 print campaigns done by you or under your creative leadership, the earliest at Saatchi & Saatchi, Madrid, for Manos Unidos and dating back to 2003 and two film campaigns (Absolut Vodka for BBH, London, and Dove from Ogilvy, São Paulo) with your name on them. Is it one of these?
I think the work that I am most proud of is “Immortal Fans” for Sport Club Recife. We created the first organ donation card for a football team. So, fans’ hearts and lungs could keep beating and cheering for their team even after death. The project helped increase organ donations by 61% and reduced to zero the heart and corneal transplants waiting list. Besides the lives we saved and the awards we won, that project changed the way I saw my career. I never thought that our ideas can have the power to do so much good. So, why not always try to use our creativity to provoke positive change? I believe “Immortal Fans” was the seed of our current company, Activista.

Any recent print or film advertising from the past year that impressed you?
The best idea I’ve seen lately is the Heinz redesigned ketchup label that shows the exact angle for the perfect pour. I know, I know …It’s not print, but it’s so genius! TV-wise the New York Times “Truth” campaign is the best TV campaign I’ve seen in years. The message, the copywriting, the art direction, the editing – it’s not just a great piece of advertising, but also a great piece of journalism.

In your opinion, do print ads have a future?
The main issue that print ads are facing is the fact that most people don’t read magazines and newspapers anymore. That means that brands are not investing as they used to and agencies are proposing other channels.
Remember all those amazing ads coming from the agencies in London? Not anymore. The good news is that print ads can have other formats now. Think about Nike’s Colin Kaepernick post on Instagram. That looks like the future of print ads. And not all the scam prints that we see in Cannes every year.

What single piece of advice would you give a young creative or student of advertising?
One great idea can change the world. Never stop pushing to find that idea. 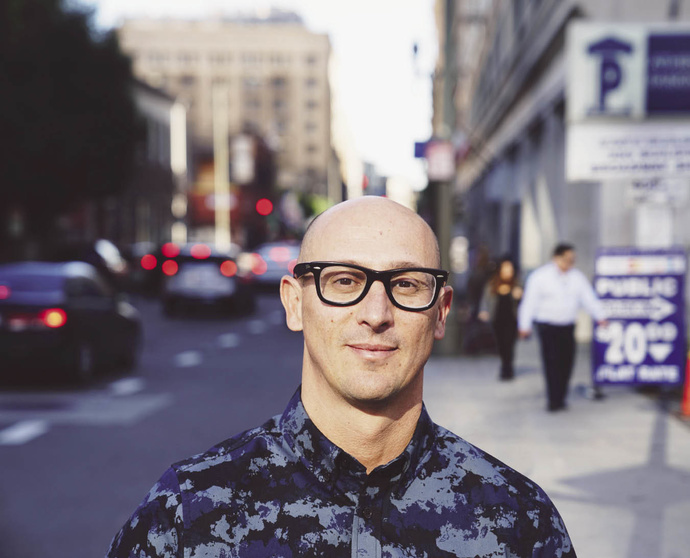 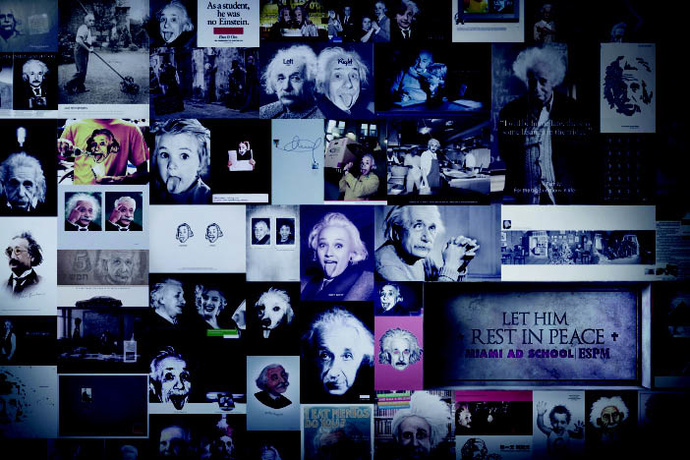 Campaign for the Miami Ad School, which challenges creatives to abandon references and imagery that have been milked to death by the advertising industry and urges them to support the search for new ideas. (Lürzer’s Archive 4-2013)

Absolut Vodka, “One Night.” A rapid-fire introduction to how the “mother of all ideas” evolved. Playing to the Boney M. classic “Sunny,” the fast-paced spot draws us into a mass of colorful images depicting significant historical events from the mists of time through to more recent decades, culminating in a very ordinary evening on which friends go out together to enjoy Absolut Vodka. Their mission? To “take it from here” by creating a better tomorrow. (Lürzer’s Archive 6-2017)

Lani as described by Lani. Right: Lani as described by a stranger. You are more beautiful than you think. This campaign for Dove skin care products shows the difference between self-perception and external assessments: women were asked to describe their features to a sketch artist, who drew their faces without seeing them. Then, when the same women were described by others, the results were a lot more flattering. (Lürzer’s Archive 4-2013) 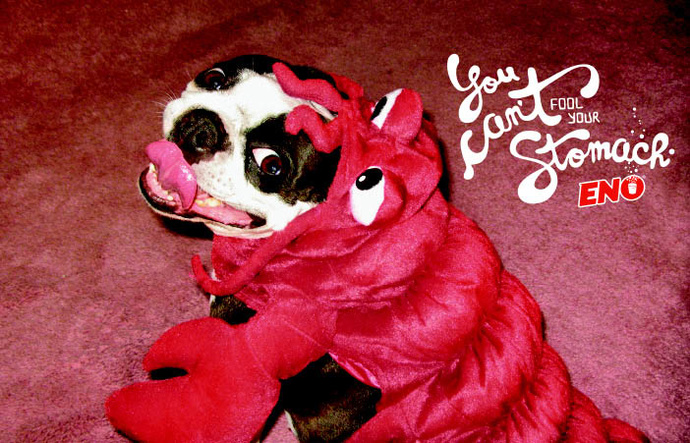