Alan Burles used to be an art director with the legendary Paul Arden at Saatchi & Saatchi in London. But his heart was really beating for photography.

So, with the first money he earned doing art direction, he bought himself an Olympus camera.

And he hasn’t stopped since. Last year, his work was rewarded with a Leica/Street Photography International Photographer of the Year award. Alan Burles explained his creativity to Hermann Vaske during a ride on the London Tube.

Now, you know my favorite question … What drives you?
Is that what you’re going to ask me? Why am I creative?

Yes, why are you creative?
Because the whole world is creative. Because to be conscious is to be creative, THIS (points around) could not exist unless it was created, universally, everywhere – by us. So I am creative because we all are.

What stops people from being creative?
Nothing. Everyone is creative, everyone.

There is no difference between creative and non-creative people?
There is a difference in how creativity is expressed but essentially, at the deepest level, because we share the same consciousness and are all creating our own worlds every moment, there is no difference. It is a choiceless thing to be creative in the way that your nature takes you.

What are your sources of influence?
Well, you know many of my influences came from advertising but I think my first influence was going to a quite conservative school, with a grey uniform and plenty of rules. This made me spend all my time in the art department because we had a very relaxed and liberal art master who, like some of his students, wasn’t interested in rules.

How important is education for creative people?
Yes, it’s important but not to an all-consuming degree. The most important thing is desire – and talent helps too. How else does Don McCullin, a North London boy with not a qualification to his name become one of the greatest war and reportage photographers of all time? Once he discovered photography in his early twenties, it burned in him.
Education can help creative people to learn about art history, photographic history, advertising history so that we are not repeating what has been done before. It can also show techniques for craft and possibly even ways to think. But innermost must be the fire that means that you just cannot do anything else.

Can schools kill creativity?
I don’t know but I think one purpose of schools is to open their student’s eyes to what choices are around them. From school I knew about painting and sculpture but not about advertising or photography. If I hadn’t asked my uncle if I could spend a few weeks at his ad agency in Bristol, I would probably never have discovered it. I do hear reports that in countries like South Korea and Singapore the students are very well educated in science and mathematics, but not in art, and there is a national shortage of creativity as a result. But I go back to my previous answer that whatever are the limitations around you, if the desire to express yourself is there, nothing will stop you. A good school or a great boss can then be a catalyst to scaling greater heights – because it helps to be pushed.

Back to influences, what about Paul Arden, was he one?
Of course, a massive one. Exactly what I just said, Paul pushed himself and as a result we were all pushed. Being at Saatchi & Saatchi, 10 years at Saatchi’s, it’s extraordinary how much influence that had on me. The energy and the dedication and the charisma of the people around us there, Paul especially, Jeremy Sinclair, fantastic people and their energy … I realise now it was a symbiotic thing, we all absorbed it.

What are examples of campaigns you did at Saatchi’s?
Probably the campaign that I was most prolific on was Silk Cut, I did seven or eight ads, mainly posters but some quirky press ads too. I worked on British Airways, Castlemaine XXXX … over 10 years, I worked on a lot of stuff.

What are the differences and similarities between art and advertising?
Well, Banksy is blurring the edges nicely, isn’t he? But I would look at history, at the greats; Rembrandt’s paintings, especially his self-portraits are paint made flesh. Look into his eyes and I defy you not see “presence” there. Can advertising do that? Does it want or need to do that? For me Rembrandt – and all great art – is consciously presenting life to us, telling us that the life you see in me is the life you feel in yourself.
Advertising is on a different level. It doesn’t do that, even though it can represent and observe life beautifully, hilariously, poignantly. It’s not a worse level or a better level, but because its purpose is to sell, it is on a different level.
If we get onto someone like Warhol then the conversation might change but the essence of the reasoning stays the same. Art presents something to be reflected upon, while advertising is presenting something to be acted upon.

So what made you decide to change, to move on?
In my years at Saatchi’s, I was being introduced to photographers that I’d never seen before, not only the great fashion and still life people like Avedon, Penn and Blumenfeld but also the reportage and street photographers like McCullin and Erwitt. I was entranced and I knew that as an art director it was my job to work with photographers like that. I also knew that I wanted to join in. But to join in I would need a camera that could go with me anywhere so I spent most of a month’s salary on an Olympus XA and I have carried some sort of pocket camera ever since. After a few years, I had all these photographs sitting in boxes doing nothing. Then digital came along and suddenly I could scan the best ones and make a website – and with some encouraging reactions I decided to commit to photography full time.

And this has led to the Leica Award and this Guardian Master of Illusion …
Well, Master of Illusion is somebody else’s title but yes, some of the photos are illusion or a bit surreal but I’m trying to do street photography that has a different level to it, that has a deeper – and I don’t mean this in a spiritual sense. Although of course I do! (laughs) – that has more finesse or layers as opposed to a joke that just goes ‘ha!’ and then it’s gone.

Not a one hit wonder?
I call them “never ending photographs” because every time you look at one, it gives you a little bit of a reward.

I think Oliviero Toscani talks about it in The Photography Masterclass.
Well, there you go. And the best music does it for us too doesn’t it?

So how did the Leica stuff happen?
I had a bit of a name in advertising but in photography I have no name. So how do you get recognized? I decided to enter competitions, I try to have exhibitions and then in June 2018 I get an email saying congratulations you are the Street Photography International Photographer of the Year – and it is sponsored by Leica.

So does this Leica sponsorship mean something special because it is such an iconic brand?
Of course, it’s massive. Yes, if Leica is the sponsor it means it is a serious competition.

I think the famous photo in Tiananmen Square was shot on a Leica.
One of the great press photos of all time.

What about other equipment?
Well, I still have my Canon G7, here it is in my pocket right now. I have a Contax 645 film camera which I love to use for portraits and I have a Nikon D750 which was in full use around Europe last summer when I was commissioned by the European Parliament to shoot 40 photographs for the European Parliamentary Elections campaign that has just taken place.

Nice job, that’s interesting …
Yes, that’s my ideal job; working solo and it’s up to me to interpret the brief for each photo.

But what about the bloody Brexit huh, how did you get the job?
Haha, good question. An ex-Saatchi colleague, Peter Russell, now works as copywriter in the Concept and Design Unit of the European Parliament and he wrote the Europe-wide election campaign #this-timeimvoting. He rang to say “I think you’d be perfect for this job. It has to be real. Snaps. No artifice. I’m going to put you up for it. But you won’t get it. You’re British, and there are Europeans up for it too.” …And I did get it, up against five Europeans (laughs).

That’s a very nice ending but would you say that Brussel’s bureaucracy is screwing up creativity?
Not in my world. I don’t know, I’m not in an agency environment any more, so maybe in an agency. But creativity is, should be, a law unto itself. Put it in a box and it will find way out.

Do you have plans for publishing a book and possibly exhibitions of your work in Europe?
I do. Both. But executing what one has planned when you are as stubborn and fussy as me brings its own problems, haha. I am still looking for an exhibition space that is affordable yet central because good footfall nearby is essential. I am looking in London, Paris and Berlin but America is of interest too. And I am doing a book right now. It will be out in time for Christmas and my working title is “Gee, My Life’s A Funny Thing” which is a line from Bowie’s Young Americans and also a nod towards my philosophy of letting my photography be a result of where life takes me.

Sounds interesting. (Pause) Amazing what you can cover on a train ride from Tottenham Court Road to Liverpool Street Station.

It’s quite chaotic in here, is your creativity based more on chaos or discipline?
Good question and I think chaos. This might explain why people don’t flock to give me work (laughs). I have a tone of voice but I don’t have a look, I don’t make everything soft focus or have a tint of blue, you know. Some photographers can be technically excellent and have a very defined look but they don’t have ideas. I interpret each situation as it is … It all comes from life, every moment in life is a new, unique, different experience so why shouldn’t my camera reflect that?

Nicely said. And good timing, just as we pull into Liverpool Street Station. Ok, I cut it!
Let me help you with your bag. 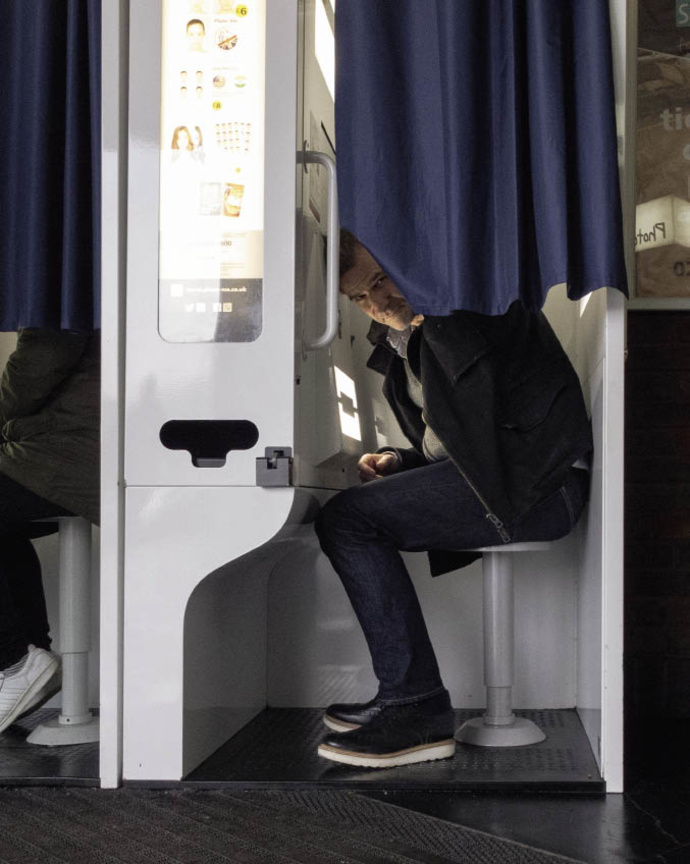 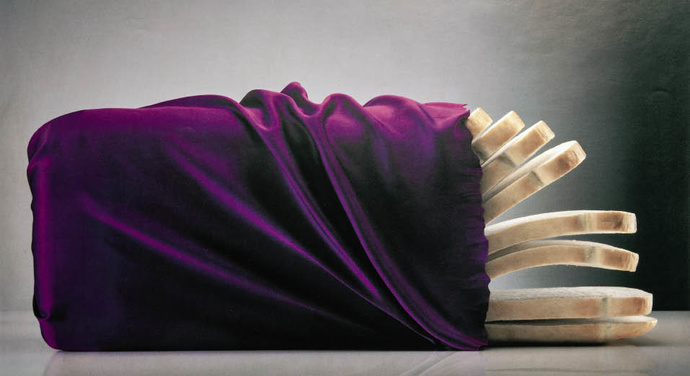 “One of my ads in the Silk Cut campaign, Bread, now in the Victoria & Albert Museum advertising collection.” 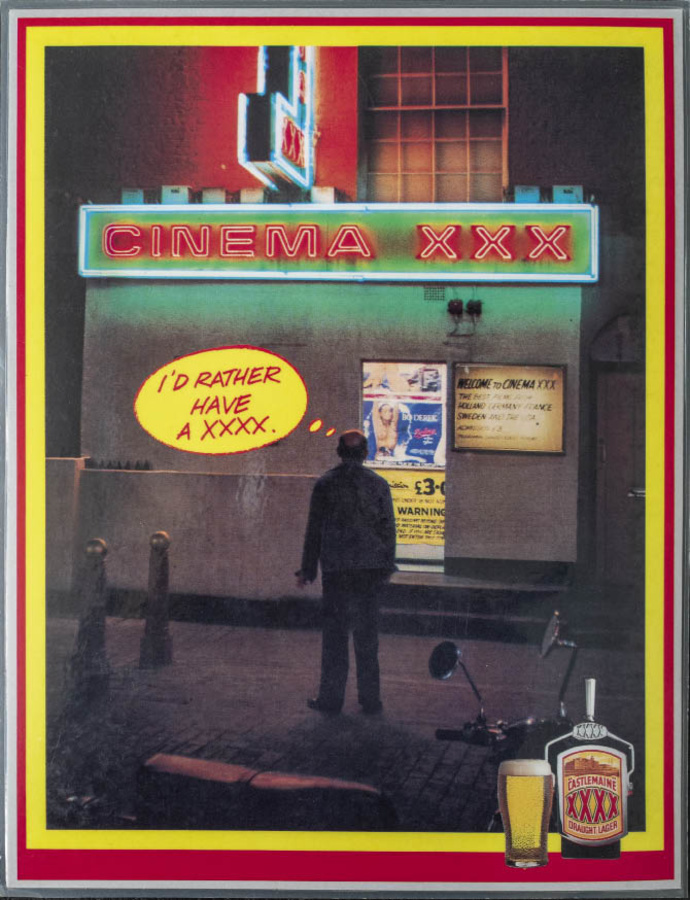 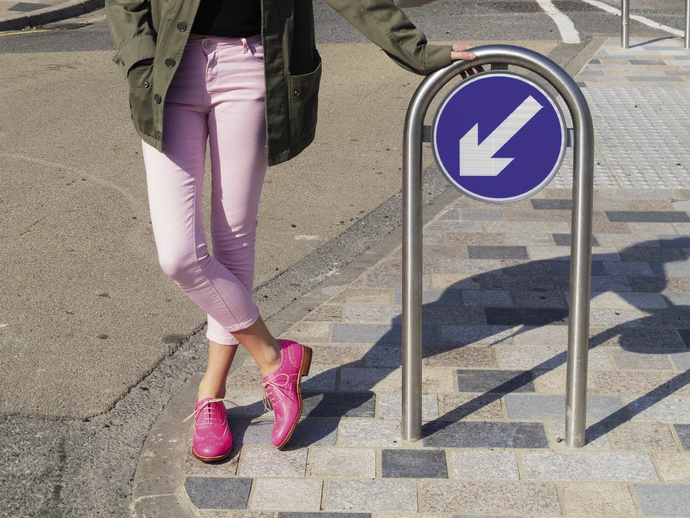 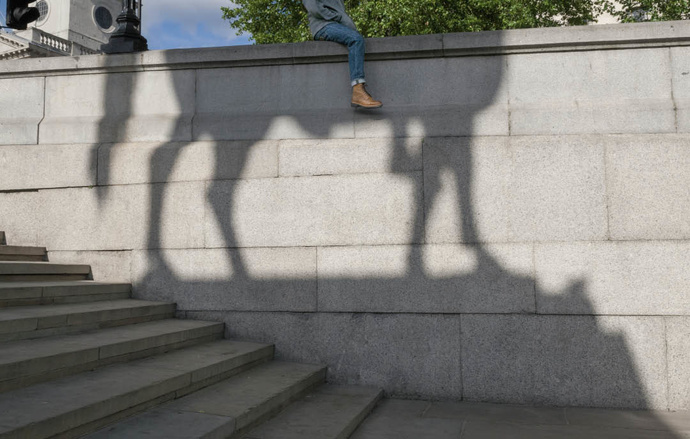 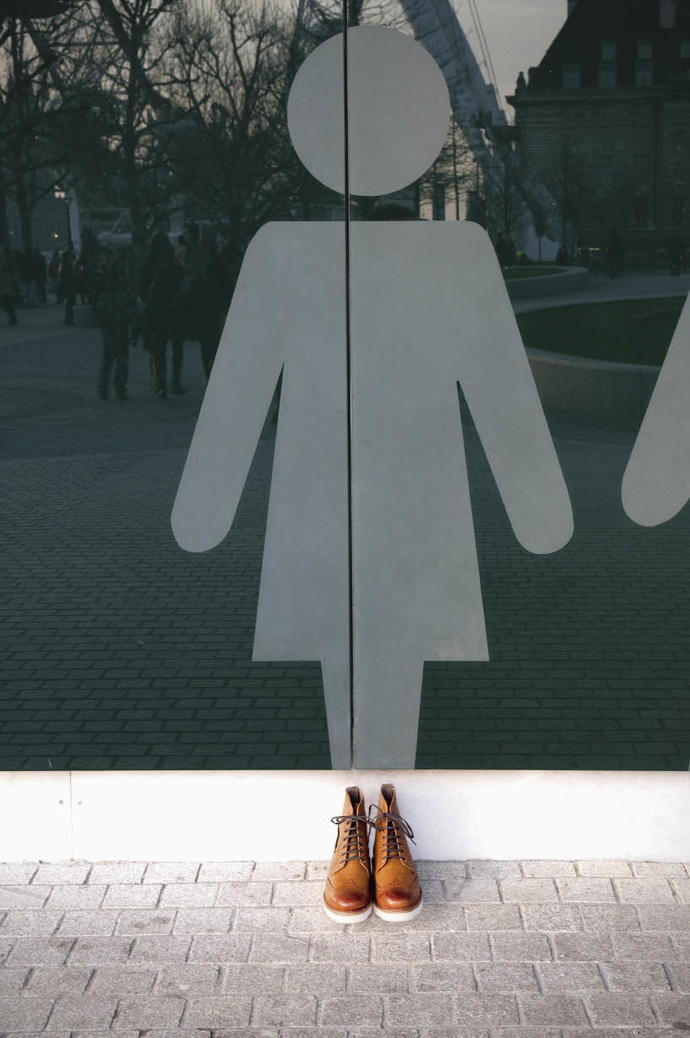 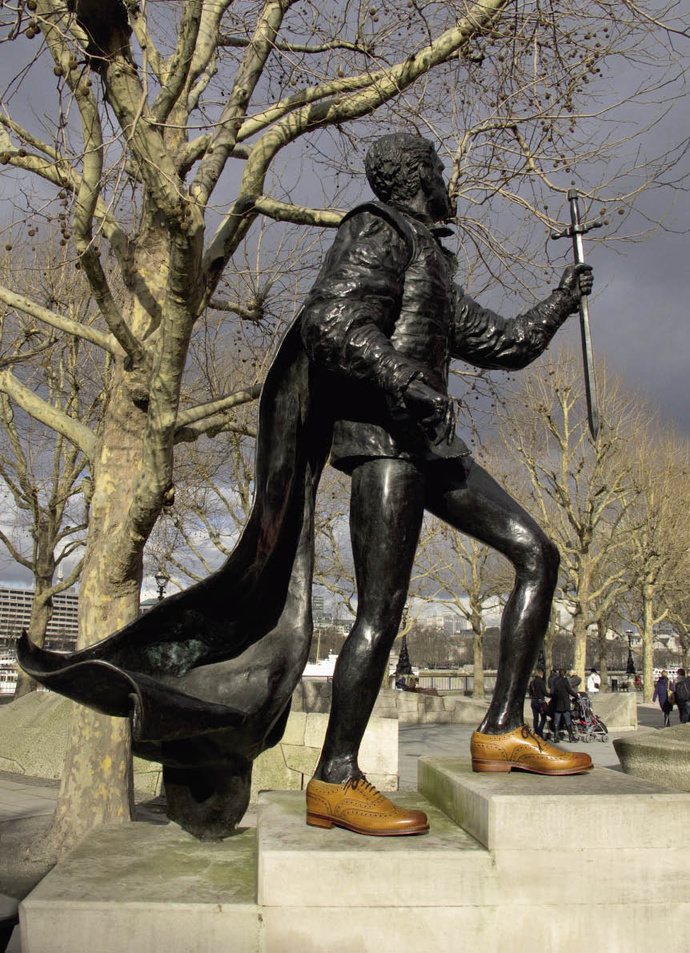 “Tim Little, owner and creative director of Grenson Shoes saw my reportage and street photography and commissioned me to shoot his new collection. 30 pairs of shoes arrived in my studio for me to take onto the street and my brief was simple. ‘Do what you do’.” 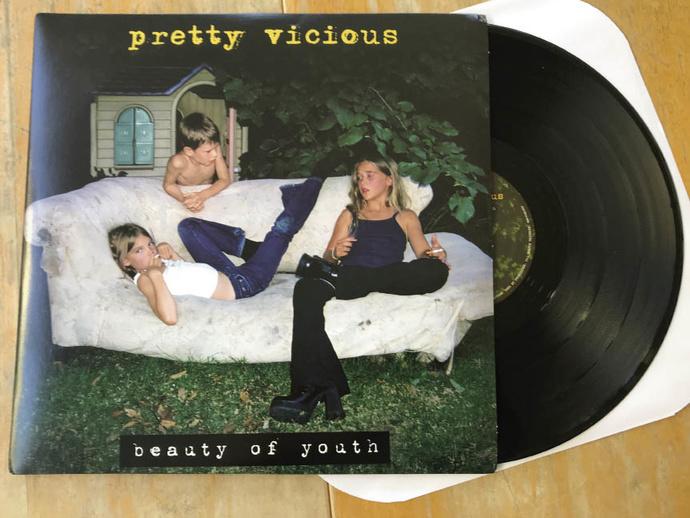 “I shoot real people in real situations, I knew all the kids in this photo, an album cover for the band Pretty Vicious.” 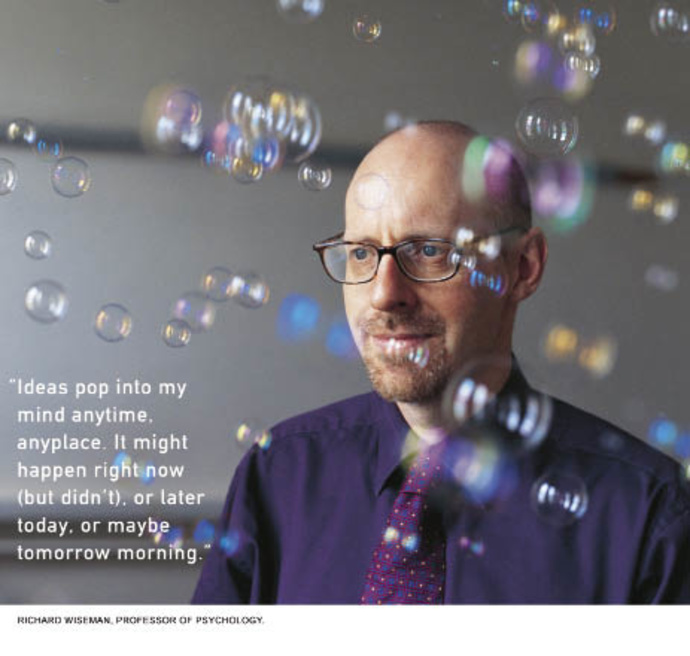 “A campaign for Omobono Advertising who asked five well known ‘experts in their fields’ to write short essays on creativity. It was for me to read them and come up with ideas for the portraits.” 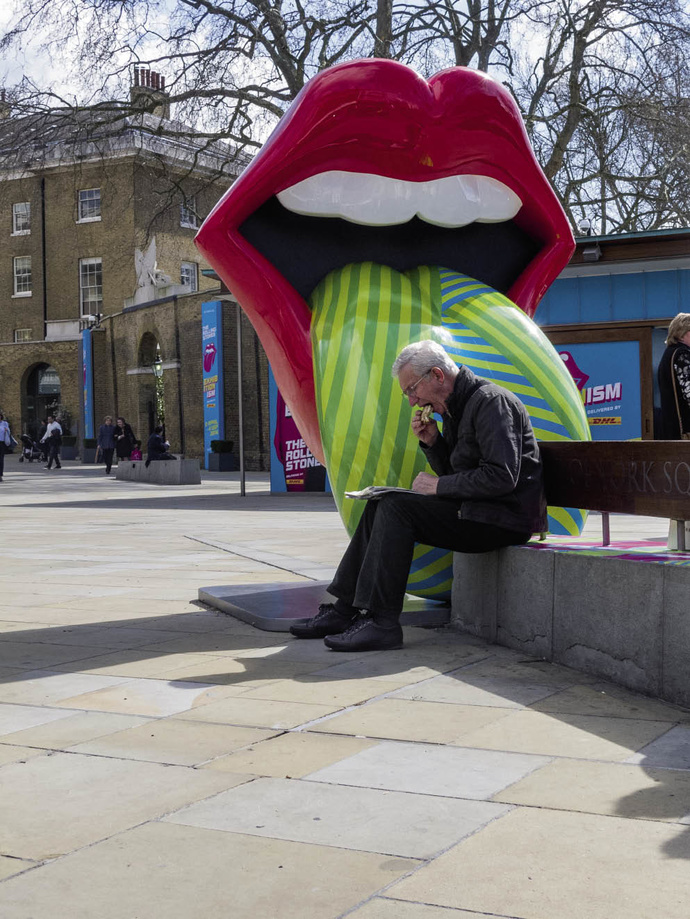 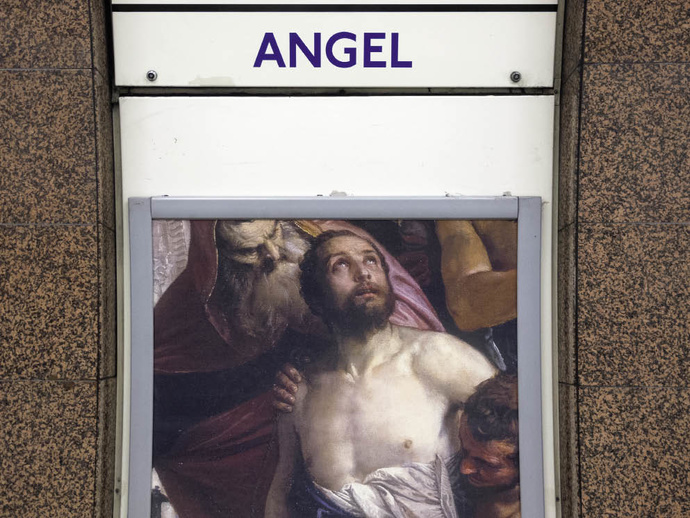 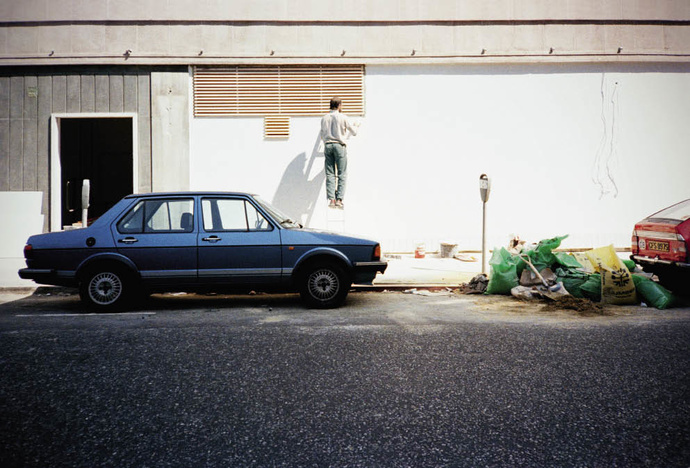 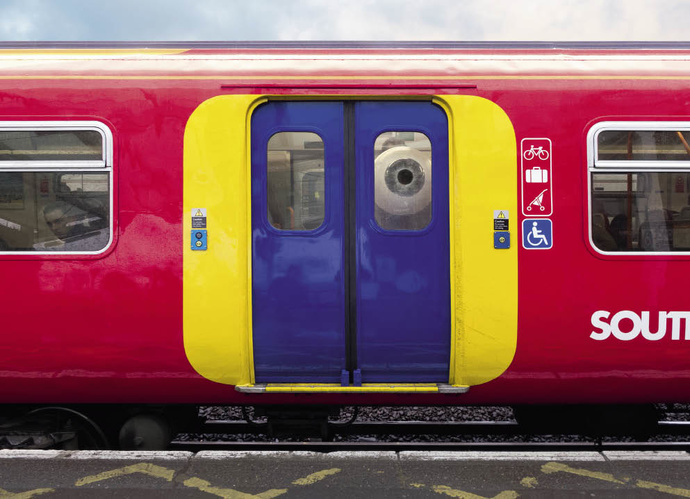 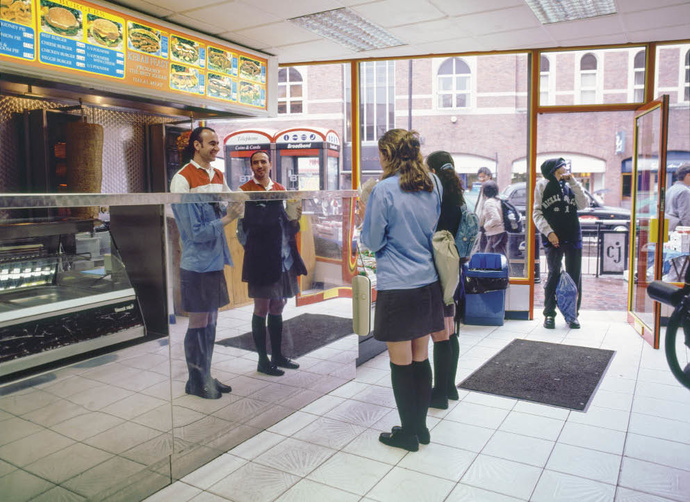 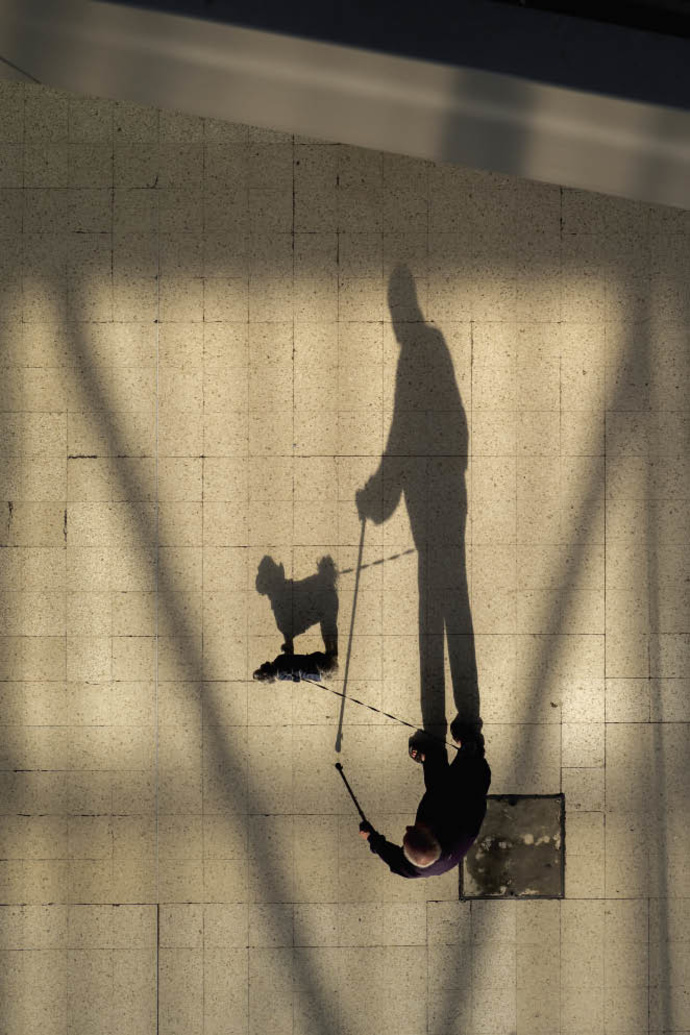